Farmers protesting against the three contentious agriculture reform laws have added another "essential" to the exhaustive list of supplies they are carrying - a DJ system. 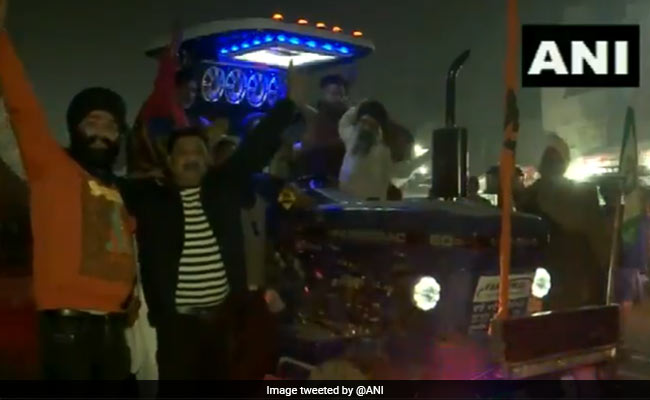 Farmers' Protest: A tractor with a DJ system was spotted at the Singhu border between Delhi and Haryana.

Indicating their preparedness to camp along Delhi borders for as long as it takes for a rollback of the three contentious laws on agricultural reforms, farmers have added another "essential" to the exhaustive list of supplies they are carrying - a DJ system.

On Friday night, a tractor with a DJ system was spotted at the Singhu border between Delhi and Haryana - one of the five border points to Delhi where thousands of protesting farmers have been camping in their modified tractors filled with ration, medical supplies and hygiene products.

"We have been here for the past few days and there is no source of entertainment for us. So, we got this tractor installed with a music system," a farmer told news agency ANI.

Images show farmers dancing to upbeat music with synchronized red and blue lights. Some even took selfies and made small videos of the modified tractor made to look like a wedding band float.

#WATCH | A tractor with DJ system was spotted at Delhi-Haryana border during farmers' protest in Singhu last night.

"For the past few days, we have been here & there is no source of entertainment for us so we have this tractor installed with a music system," a farmer said. pic.twitter.com/p2r3Ec9Dwb

While farmers, including men, women and children of all ages, were known to carry their own ration and stoves, aid organisations have pitched in to install portable toilets for women.

An ambulance and cartons full of medicines for various ailments were arranged by a group of farmers, one of the hundreds participating in the protest. They even have a doctor to take care of medical emergencies.

As the protest - now in its 11-th day - across the country intensifies amid a call for non-violent Bharat Bandh on December 8, a third round of talks between the government and farmers' representatives is underway today.

Two rounds of talks this week have fallen through.

This is the biggest farmers' protest in years and numbers continue to swell at Delhi's borders amid the novel coronavirus pandemic, which has affected over 96 lakh people across India.