The protesters said they planned to ''gherao'' ML Khattar's official residence, according to Chandigarh Police. 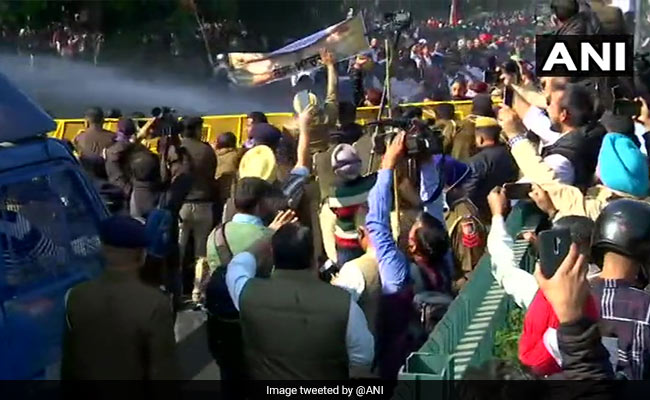 The protesters said they planned to ''gherao'' Mr Khattar's official residence, according to Chandigarh Police.

A Youth Congress worker said they were protesting against the Khattar government for stopping thousands of farmers while they were taking part in their "Delhi Chalo" march, and using water cannons and tear gas against them.

The Chandigarh Police first used water cannons against the Congress workers at barricades set up about three kilometers ahead of Mr Khattar's official residence.

But some activists managed to reach closer to the Chief Minister's home after jumping over police barricades. Again, water cannons were used to stop them.

There was a strong police deployment near Mr Khattar's residence.

The workers led by Punjab Youth Congress president Barinder Dhillon had earlier gathered near the Chandigarh headquarters of the Congress.

They raised slogans against the BJP governments of Narendra Modi at the Centre and Manohar Lal Khattar in Haryana, calling them "anti-farmer".

Last week, the Haryana Police had tried to stop Punjab farmers from entering the state continue their march towards the national capital.

Later, however, they removed barricades at all Punjab-Haryana border points.

Thousands of farmers, most of them from Punjab, are now gathered at Delhi's borders protesting against the three new laws enacted at the Centre in September.

Farmer unions say the three new laws will lead to the dismantling of the minimum support price (MSP) system, leaving farmers to the mercy of corporate houses.

But the government says the MSP system will continue and the new laws will give farmers more options to sell their crop.

Farm leaders met Union ministers on Tuesday, but the two sides failed to break the deadlock.