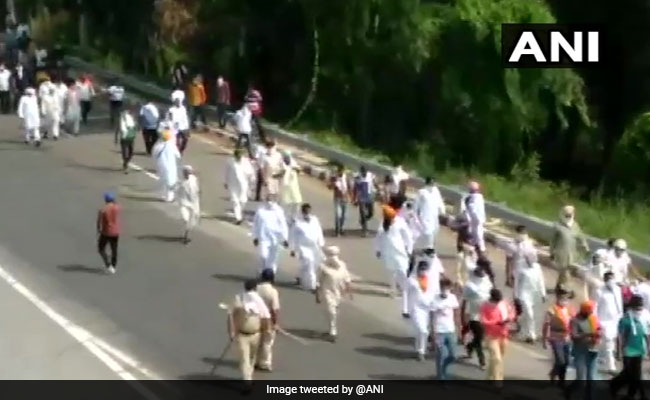 The Haryana wing of farmers' organisation Bharatiya Kisan Union (BKU) has said it would block all major highways in the state for three hours - 12PM to 3PM - tomorrow as part of its protest against the central government's refusal to withdraw contentious farm sector bills, which the BJP claims will open the agri market, and benefit small and marginal farmers.

As the BKU urged its members to block all major highways amid continued protests outside the Ambala deputy commissioner's office, Haryana Home Minister Anil Vij appealed that farmers not block national highways, and allow ambulances and the unwell to reach hospitals amid the coronavirus pandemic.

"It is farmers' right to protest. India is a free country, it is in the constitution," the BJP minister said, adding that opposition parties were misleading farmers.

The call for road blockades comes amid widespread protests across various states, including Punjab, with several more planned over the course of the coming week, including a "rail roko" from September 24 to 26.

The bills, which were recently passed in the Lok Sabha amid stiff opposition from farmers and political parties, including BJP's oldest ally Shiromani Akali Dal, are expected to be presented tomorrow before the Rajya Sabha where the numbers seem to be stacked in the ruling party's favour.

Opposition parties and allies, including Akali Dal's Harsimrat Kaur Badal who recently resigned as a Union minister, said their appeals to the Prime Minister to listen to the concerns raised by the farmers and hold open discussions have fallen on deaf ears.

PM Modi has remained unfazed in his defence of the legislatures, which farmers believe will dismantle the government support they enjoy and leave them vulnerable to exploitation by private players. He has accused opposition parties of spreading "misinformation" that farmers would be shortchanged.