Mohammed Zubair was arrested by the Delhi Police on June 27 for allegedly hurting religious sentiments through one of his tweets. 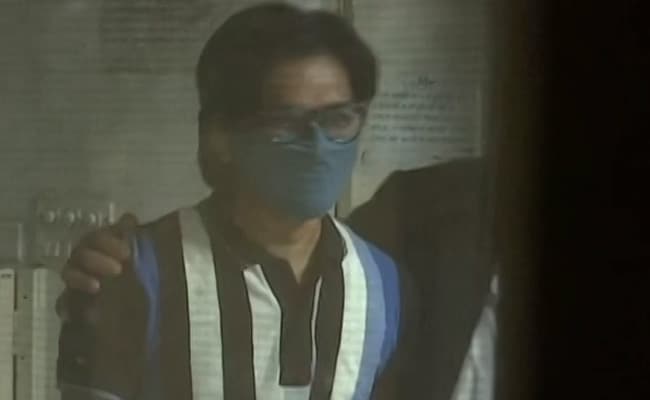 The Delhi Police has told the Delhi High Court that a laptop and other devices seized from Alt News co-founder Mohammed Zubair are deposited with the forensic science laboratory for recovering data that needs to be analysed regarding an alleged objectionable tweet posted by him in 2018 against a Hindu deity.

The police made the submissions in an affidavit filed in the high court in response to a plea by Zubair against his arrest and search and seizure exercise in a case related to the alleged objectionable tweet.

Zubair has challenged the legality and propriety of a trial court's June 28 order granting the custody of fact-checking website's founder to the police for four days.

As an interim relief, Zubair's counsel has sought that till the petition is decided by the high court, the police shall not venture into Zubair's laptop as the tweet was made through a mobile phone and not the computer.

The plea was filed before the Supreme Court granted interim bail to him on July 20.

Justice Purushaindra Kumar Kaurav listed the matter for further hearing on October 31, while granting time to Zubair's counsel to file a rejoinder in the case.

The police, in its affidavit, said during the police custody remand, one laptop, two invoices, and a hard disk have been recovered from the Bengaluru residence of Zubair based on a disclosure statement which is admissible under the Indian Evidence Act and has to be looked upon at the time of trial.

It said that quashing the police custody remand order passed by the trial court will make the recovery inadmissible.

"The peripherals seized during the police custody remand have already been deposited at Forensic Science Laboratory, Rohini, Delhi. Data is to be recovered from these devices and is to be analysed with respect to the tweet in question and other similar-natured tweets done by accused Mohd Zubair (if retrieved). As such the seized articles/ devices are not beyond allegation, as mentioned by the petitioner in the prayer of the petition," the affidavit said.

It, however, said the petitioner may approach the concerned forum for the release of seized articles on 'superdari' (handing over custody of something to a person till next orders) as and when the analysis of these devices is complete.

The police sought to dismiss Zubair's petition saying it has become infructuous as the relief sought regarding quashing of police custody order could not be granted as the period has already lapsed.

Lawyer Vrinda Grover, appearing for Zubair, had earlier informed the high court that the trial court had granted bail to him in July but urged the bench to grant him relief as sought in the petition.

On July 1, the high court issued notice on Zubair's petition and granted time to the investigating agency to file its response to the plea.

Zubair was arrested by the Delhi Police on June 27 for allegedly hurting religious sentiments through one of his tweets.

His counsel had argued before the court that the police remand order passed after the petitioner's arrest was mechanical and without application of mind and that no offence was made out against him.

Solicitor General Tushar Mehta, appearing for Delhi Police, raised objections with respect to the maintainability of the petition and said that the FIR is only an "initiation of proceedings" and the investigating agency may find material to show that there is no offence or that there is a serious offence which is not part of the FIR.

Earlier in June, a case was registered against Zubair under sections 153A (promoting enmity between different groups on grounds of religion, race, place of birth, language, etc.) and 295A (deliberate and malicious act intended to outrage religious feelings) of the Indian Penal Code (IPC).

Police had said the case was registered on the complaint of a Twitter user who accused him of hurting religious sentiments.

Police, while seeking an extension of Zubair's custody by five days, had alleged before the trial court that the accused was following a trend where he used religious tweets in an effort to get famous and that there was a deliberate effort to create social disharmony and hurt religious feelings.

The investigating agency also said the accused joined the probe but did not cooperate and various materials from his phone were deleted.

Joe Biden Invites PM Modi For State Visit To US This Summer: Report