The Bhutanese royal family's visit assumes significance in the wake of the standoff between Indian and Chinese troops in the Doklam region of Bhutan. 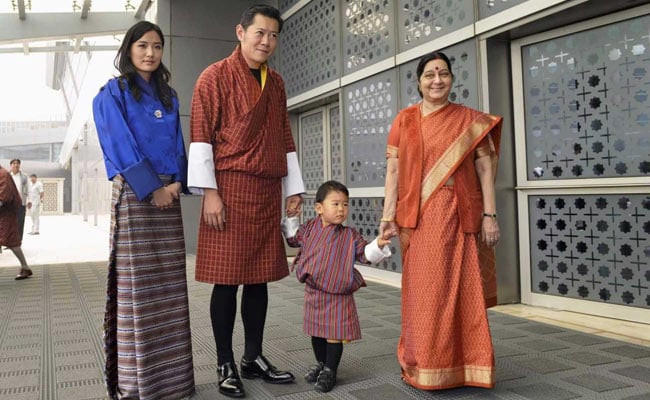 "#EverlastingFriendship. EAM @SushmaSwaraj calls on His Majesty the King of Bhutan. The Royal family is on a 4-day goodwill visit to India," External Affairs Ministry spokesperson Raveesh Kumar tweeted.

The Bhutanese royal family's visit assumes significance in the wake of the standoff between Indian and Chinese troops in the Doklam region of Bhutan.

Indian and Chinese troops were locked in an over two-month-long standoff at the Doklam plateau in Bhutan.

The crisis, which erupted in June over Chinese moves to build a road in an area claimed by Bhutan, ended in August, with both sides deciding to "disengage" from the face-off point.

While India and Bhutan said that Beijing's move violated the status quo in the India-Bhutan-China international trijunction, China claimed that it was its territory.

"#Adorableguest. EAM @SushmaSwaraj greets the Gyalsey (Prince) of Bhutan on his first visit to India as His Majesty and Her Majesty look on," Mr Kumar said in a separate tweet along with a picture.

There are a number of institutional mechanisms between India and Bhutan in areas such as security, border management, trade, transit, economic, hydro-power, development cooperation and water resources.

Promoted
Listen to the latest songs, only on JioSaavn.com
India has set up three hydroelectric projects (HEPs) in Bhutan totalling 1,416 MW, which are operational and exporting surplus power to India. About three-fourths of the power generated is exported and the rest is used for domestic consumption.