The UK on Thursday announced that Indian travellers fully vaccinated with both doses of Covishield or any other vaccine approved by it will not require to undergo a 10-day mandatory quarantine on arrival from October 11. 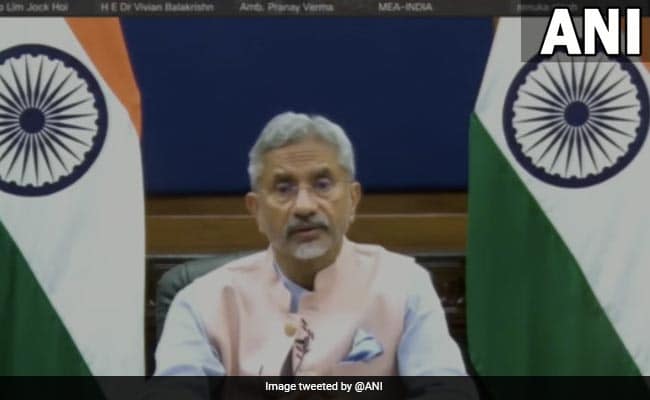 S Jaishankar spoke to his UK counterpart on issues relating to travel between two countries.

A day after the UK announced lifting of its quarantine rule for Indian travellers, External Affairs Minister S Jaishankar on Friday spoke to his British counterpart Liz Truss with a focus on issues relating to travel between the two countries.

The UK on Thursday announced that Indian travellers fully vaccinated with both doses of Covishield or any other vaccine approved by it will not require to undergo a 10-day mandatory quarantine on arrival from October 11.

"Good to talk to UK Foreign Secretary @trussliz. Agreed to facilitate travel between our two countries. This will help to implement the Roadmap 2030," Mr Jaishankar tweeted.

The roadmap is aimed at elevating bilateral ties to a comprehensive strategic partnership and guide cooperation over the next decade in the key areas of trade and economy, defence and security, climate change and people-to-people connect among others.

The annoucement on lifting quarantine rule for Indian travellers was made by British High Commissioner to India Alex Ellis on Thursday evening.

"From Monday, a traveller from India to the UK, double jabbed with Covishield or another vaccine recognised by the UK regulator does not have to quarantine. It will be easier and cheaper to enter the UK. This is great news," Ellis said in a video statement.

Separately, the UK issued a fresh travel advisory and said the "red list" will reduce to seven countries and "proof of vaccination will be recognised from 37 new countries and territories including India from 4 am on Monday.

Under the new British rules that came into effect on October 4, Indians, fully vaccinated with Covishield, required to undergo 10-day quarantine as the UK had issues with India's COVID-19 vaccine certification.

India also imposed reciprocal action under which all British nationals arriving in India from the UK needed to undergo a mandatory 10-day quarantine even if they are fully vaccinated.

In its latest travel advisory, the UK said the government extended the inbound vaccinated arrivals system to a further 37 countries and territories across the globe including India, South Africa and Turkey, which meant eligible vaccinated passengers arriving from the rest of the world countries only need to take a "day two test in England".

People familiar with the matter said Indian travellers who have received both doses of Covishield or another UK-approved vaccine will not also be required to take a pre-departure test nor take a day eight test following their arrival.

The UK initially refused to recognise Covishield, manufactured by the Serum Institute of India (SII). However, following India's strong criticism of the decision, the UK on September 22 amended its new guidelines and included the vaccine.

The move did not provide any relief from quarantine rules for Indian travellers vaccinated with two doses of Covishield.

Later, British officials said the UK has issues with India's vaccine certification process and not with the Covishield vaccine