S Jaishankar will hold discussions with his counterpart and Sri Lanka's leadership on the entire gamut of bilateral relations, the Ministry of External Affairs (MEA) in New Delhi said. 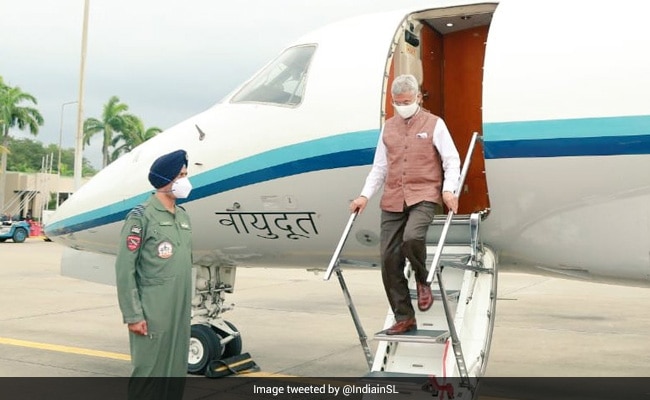 S Jaishankar is on a visit to Sri Lanka from December 5 to 7.

External Affairs Minister S Jaishankar has reached Colombo in Sri Lanka for a three-day visit during which he will hold discussions with Sri Lanka's top leadership on the entire gamut of bilateral relations.

Mr Jaishankar's visit from December 5 to 7 following an invitation by his Sri Lankan counterpart Dinesh Gunawardena is his first foreign visit of the year. This is also the first by a foreign dignitary to Sri Lanka in the new year.

He will hold discussions with his counterpart and Sri Lanka's leadership on the entire gamut of bilateral relations, the Ministry of External Affairs (MEA) in New Delhi said.

"EAM @DrSJaishankar arrived in Colombo on his first foreign visit of the year. He is scheduled to meet @GotabayaR, @PresRajapaksa, @DCRGunawardena and several other dignitaries and business leaders during the course of his stay," India's High Commission said in a tweet.

The visit signifies the priority both countries attach to strengthening their close and cordial relations in all spheres of mutual interest, the Ministry of External Affairs said in New Delhi ahead of the trip.

Mr Jaishankar is visiting Colombo over three months after Prime Minister Narendra Modi and his Sri Lankan counterpart Mahinda Rajapaksa held a virtual summit during which the two sides agreed to further expand ties in a range of areas such as anti-terror cooperation, maritime security and trade and investment.

In the talks, India's development partnership in Sri Lanka was discussed and both sides reached an understanding to extend a pact on High Impact Community Development Projects (HICDPs) for a five-year period beginning 2020.