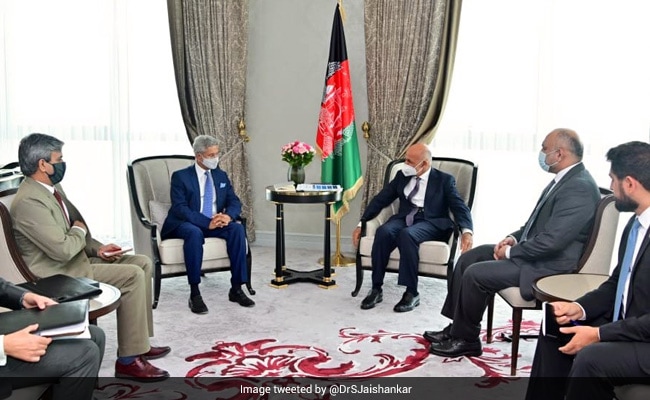 External Affairs Minister S Jaishankar on Thursday met Afghan President Ashraf Ghani in Tashkent and discussed the fast-evolving situation in Afghanistan in the face of withdrawal of US forces from the country.

The meeting took place on the sidelines of a multilateral connectivity conference.

"Pleased to call on President @ashrafghani. Discussed the current situation in and around Afghanistan. Reiterated our support for peace, stability and development of Afghanistan," the external affairs minister tweeted.

Mr Jaishankar travelled to Tashkent after a two-day visit to Tajikistan's capital Dushanbe where he attended a crucial meeting of the foreign ministers of the Shanghai Cooperation Organisation (SCO).

The foreign ministers of the SCO countries extensively deliberated on the deteriorating security situation in Afghanistan triggered by the Taliban's attempts to expand its influence in that country following the withdrawal of the US forces.

The US has withdrawn majority of its forces from Afghanistan.

Afghanistan witnessed a series of terror attacks in the last few weeks as the US aimed to complete the withdrawal of its forces from Afghanistan by August-end, ending a nearly two-decade of its military presence in the war-ravaged country.

In his remarks at the SCO meeting on Wednesday, Mr Jaishankar said that the future of Afghanistan cannot be its past and the World is against seizure of power by violence and force.

"Happy to meet with Bangladesh FM Dr AK Abdul Momen on the sidelines of the Tashkent Connectivity Conference. A good opportunity to review the progress in our ties, including its connectivity aspects," Mr Jaishankar tweeted.