The signatories said the complete integration of Kashmir with the Union of India was an unfinished task since the Constitution was adopted in 1950. 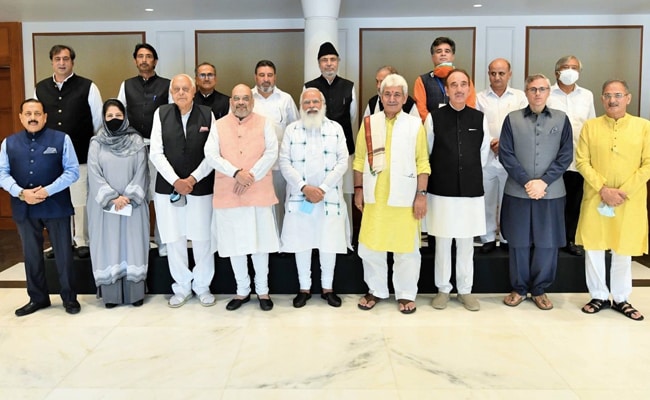 Fifteen retired Indian Police Service (IPS) officers today wrote an open letter to Prime Minister Narendra Modi praising him for his government's "courageous and decisive" efforts to resolve the Kashmir issue, and termed "exemplary" the recent initiative by the Centre to reach out to political stakeholders there.

The signatories, 10 of whom have served as state Director Generals of Police, said the complete integration of Kashmir with the Union of India was an unfinished task since the Constitution was adopted in 1950.

The Modi government's "painstaking, courageous and decisive efforts" at attempting to resolve the complex Kashmir issue have been noticed ever since the Modi dispensation came to power seven years ago, they added.

"It is a matter of national pride that over these years the central government tried all means possible to achieve this goal.

"The momentous decision to annul Article 35A and read-down Article 370, was efficiently implemented, with all necessary precautions to prevent the loss of life and property," the letter said.

Now, a citizen of Kashmir can proudly call himself or herself Indian and receive all benefits that the Indian State bestows on its citizens, it said.

The retired police officers also said it is a matter of great satisfaction that the government's ability to foresee future events and to plan for all kinds of possibilities led to a tight control over crime, terrorism and public order since August 5, 2019, when the Article 370, which gave special status to Jammu and Kashmir, was abrogated and the erstwhile state was divided into two Union Territories.

They said the implementation of the plan was impeccable, given that Pakistan, the "permanent interloper" in matters regarding Kashmir, was boxed into a difficult position, given its earlier stand of non-recognition of Article 370.

"Of more interest is the fact that Pakistan is now calling for the reinstatement of Statehood for Jammu and Kashmir, which amounts to accepting Jammu and Kashmir as part of the Union of India," they said.

The retired police officers also appreciated the manner in which the government organised an impeccable system of managing external pressures such as those from western nations and multilateral bodies like the United Nation, which, they said, had been interfering in India's internal affairs regarding Kashmir for several decades.

"None of these external elements were able to create any significant impact, except the appearance of articles in media of choice. Almost two years have elapsed and the seal of integration with the Union is absolute," they said.

The Central government's most recent initiative at reaching out to political stakeholders and countering the twin elements of "Dil ki doori" (distance between hearts) and "Dilli ki doori" (distance from Delhi), in order to enhance trust, is exemplary, reflecting a dynamic approach to policy-making, the letter said.

"We are hopeful that you will fulfil your promise of bringing economic development to Jammu and Kashmir, with all the robust investment plans that have been finalised," they said.

PM Modi Thursday held an all-party meeting on Jammu and Kashmir where he said the ongoing delimitation exercise there has to happen quickly so that polls can be held to form an elected government that gives strength to its development trajectory.

The prime minister had also said he wanted to remove "Dilli ki Duri" as well as "Dil Ki Duri", according to sources.