Sharjeel Usmani, the son of Assistant Professor Tariq Usmani of the AMU's Department of Geography, was picked by the UP's anti-terrorist squad (ATS) sleuths from his uncle's house in Azamgarh on Wednesday. 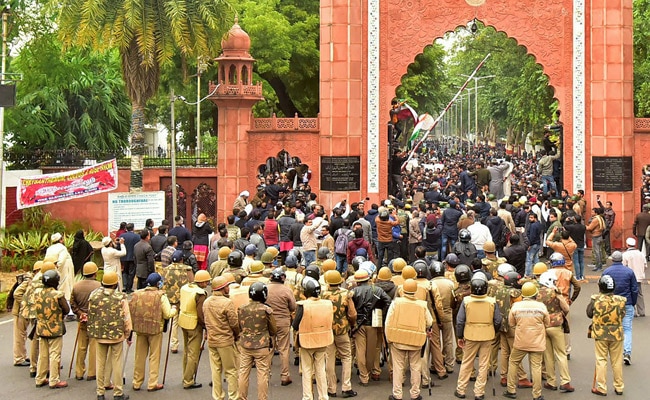 A former AMU student leader and son of a varsity teacher has been arrested for his alleged role in the December 15 and subsequent violence during the campus protest against changes in the citizenship law, police said on Friday.

Sharjeel Usmani, the son of Assistant Professor Tariq Usmani of the AMU's Department of Geography, was picked by the UP's anti-terrorist squad (ATS) sleuths from his uncle's house in Azamgarh on Wednesday and was subsequently produced in a court in Aligarh which remanded him in judicial custody, they said.

He has been lodged at a temporary jail at Lodha about 20 kilometres from Aligarh, they added.

Civil Lines Circle officer Anil Samania said Mr Sharjeel was wanted in four different cases including the violence which broke out at AMU on December 15.

He has been charged with several penal offences, including sections 147 (rioting), 148 (rioting while armed with a deadly weapon), 149 (committing offences in the prosecution of a common object of an unlawful assembly), 153 (inciting riots) and 153 A (carrying arms in a procession) of the Indian Penal Code, said Mr Samania.

The other charges are sections 188 (disobedience to public servants' order), 307 (attempt to murder), 322 (inflicting grievous injuries), 353 (assaulting public servants) and 506 (making criminal intimidation) of the IPC besides the section 67 of the Information Technology Act, he added.

Aligarh's Senior Superintendent of Police Muniraj G earlier on Friday said Mr Sharjeel has also been booked under the IT Act for trying to spread communal discord as he had on December 6 last year also posted an objectionable picture of former deputy prime minister L K Advani related to the Babri mosque demolition.

The police also claimed Sharjeel was in touch with several anti-CAA protesters at JNU, including Sharjeel Imam, who is presently in jail.

After the ATS sleuths whisked away Mr Sharjeel from his uncle's house on Wednesday, his family members went into a tizzy and frantically tried to contact various authorities both in Aligarh and Azamgarh to know about his whereabouts. They had also contacted the human rights commission.

Mr Sharjeel's father told reporters on Friday that for more than 24 hours "we were not provided with any information regarding his whereabouts. We have approached the Human Rights Commission for what has transpired ".

The AMU Students Collective, a campus-based human rights group has condemned the manner of Mr Sharjeel's arrest and demanded his release.

The AMU authorities, however, have distanced themselves from the matter.

When contacted AMU spokesman, Professor Shafay Kidwai told PTI, "Sharjeel Usmani is no longer our student and we were not informed about the arrest."

The AMU Teachers Association (AMUTA) too preferred to sidestep the issue.

AMUTA president, Prof Najmul Islam, was not available for comment on this issue.