A video that emerged later in the day showed several voters complaining that the EVMs they used seemed to choose a certain symbol regardless of which button they pressed. 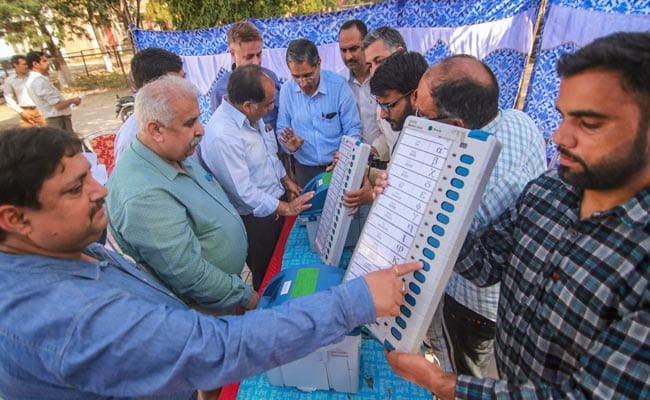 Opposition parties want EVMs to be junked in favour of ballot boxes.

The Electronic Voting Machine (EVM) came in for intense criticism in the first phase of the Lok Sabha elections today, with reports of glitches cropping up from several places across the 18 states and two Union Territories that went to the polls.

The loudest protest was probably that of Andhra Pradesh Chief Minister Chandrababu Naidu, who demanded a repoll in nearly 150 polling stations due to non-functioning of EVMs. "I demand repolling in all such polling stations and others where voting had not commenced even at 9.30 am due to the failure of EVMs," Mr Naidu, who is also the Telugu Desam Party chief, wrote in a letter to the Chief Election Commissioner. He had earlier claimed that even the EVMs at a polling booth where state Chief Electoral Officer Gopal Krishna Dwivedi went to cast his vote were not functioning.

A video that emerged later in the day showed several voters complaining that the EVMs they used seemed to choose a certain symbol regardless of which button they pressed. "We punched on three different symbols, but in all instances, our votes seemed to be going to one. I brought this to the attention of the official in charge, and he agreed that the machine had a glitch. They checked the machine, and it started functioning properly only after that," a voter, Dhara Singh, was seen saying in the video. "I just want my vote to go to the party of my choice."

Later, Bahujan Samaj Party candidate SC Mishra registered a complaint with the Election Commission. "We have sent them a video clip of people pressing the 'elephant' symbol but the vote going to the BJP's 'lotus'. Although our people complained against it, no action was taken," he said.

EVM glitches were also reported at many places in seven Lok Sabha constituencies across Maharashtra, including Bhandara and Yavatmal-Washim, which went to the polls today, news agency PTI reported an official as saying. Bhandara district collector Shantanu Goel, however, said that the electoral process was not affected. "Voting is going on smoothly in the Bhandara-Gondiya constituency, and faulty machines -- if any -- are being replaced within 15 minutes," he added.

Delhi Chief Minister Arvind Kejriwal lashed out at the Election Commission on Twitter. "What is happening, EC? Are these elections fair? Anti-BJP votes deleted all across India. Reports coming from across India that votes have been deleted on unprecedented scale. Why are all faulty EVM machines seen to be voting always for BJP?" he asked.

A voter at polling booth in Jammu was manhandled by the BSF because he refused to cast his vote for BJP. Using armed forces at polling stations to coerce people to vote for the BJP shows their desperation & hunger to usurp power by hook or crook. pic.twitter.com/Hmr8zocQ44

The National Conference and the Peoples Democratic Party (PDP) also alleged EVM malfunctioning in several places across Kashmir. PDP chief Mehbooba Mufti even tweeted a video of people protesting after security personnel allegedly tried forcing them to vote for the BJP.

In Andhra Pradesh, a Jana Sena Party candidate was arrested after he took out his frustration on an EVM at a polling station in Anantapur district's Guntakal assembly constituency. Mr Madhusudan's problem, however, was not with the machine itself. He was angry about staffers at the station not displaying the names of assembly and Parliament constituencies properly.

Jharkhand Extends Lockdown-Like Restrictions Till May 27 Amid Covid Surge