Security forces have stepped up the offensive against the terrorists in recent months but have had to pay a heavy price for gaining an edge over the terrorists. Just over the weekend, 8 security personnel had lost their lives in neighbouring Pulwama district. 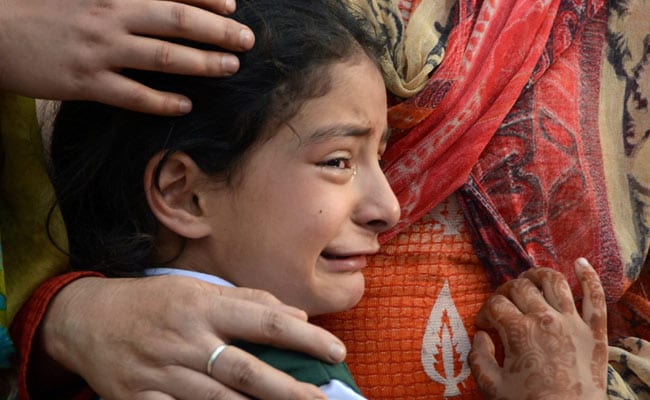 SRINAGAR: The haunting image of a seven-year-old, tears streaming down her face, has brought home the tragedy playing out for the security personnel and their families in Kashmir. Over the last eight months, over 55 security personnel have been killed fighting terrorists in Jammu and Kashmir. One of them was Zohra's father, Abdul Rashid Peer.

Abdul Rashid Peer was on a routine round on Monday when he was shot in a busy market in Anantnag district of south Kashmir that has been the hub of terror attacks.

Security forces have stepped up the offensive against the terrorists in recent months but have had to pay a heavy price for gaining an edge over the terrorists. Just over the weekend, 8 security personnel had lost their lives in neighbouring Pulwama district.

"Our papa had not done anything wrong. Why was he killed? ... But I am proud that he attained martyrdom. I want the perpetrator behind his killing should be punished," said Zohra's elder sister said after the wreath laying ceremony to let Abdul Rashid's colleagues and government officials pay their last respects. It was here that they saw the young girl in tears.

"Your tears have shaken many hearts.... Every drop of your tear sears our heart," a top police officer in South Kashmir told Zohra in a moving Facebook post that called her father "a true policeman who sacrificed his life in the line of the duty".

"You are too young to understand as to why this happened," SP Pani, deputy inspector general of police in-charge of south Kashmir said, telling her that many police families had "suffered and undergone irreparable trauma defending the common good for the society".

Mohammad Yasin Teli, 32, of the Central Reserve Police Force who was among the eight killed over the weekend, is also one of them. "We are proud of his sacrifice for the country," said sister Haneifa unsure how they will get by in the absence of their brother, the family's sole bread earner.

"We are four sisters and our father and mother are ill. We have no other support," she said.

"I can only say that one more person from Jammu and Kashmir has been killed," said SP Vaid, the state's police chief, blaming the proxy war unleashed from across the border for "killing people of this place".
Comments