Chief Justice of India DY Chandrachud said judges across the country must reflect upon the constitutional vision of securing justice, equality and liberty. 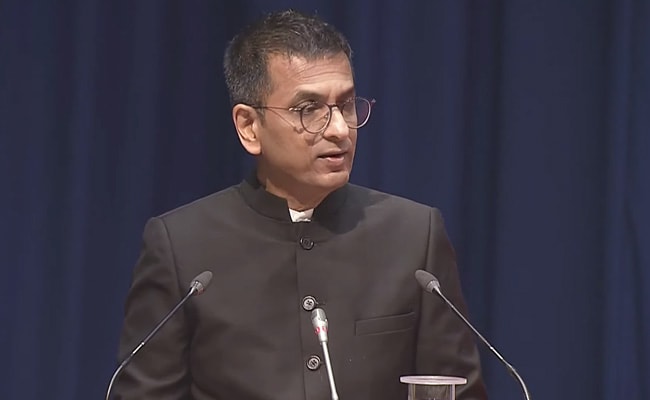 Chief Justice of India D Y Chandrachud on Saturday said technology must be augmented with institutional reforms to resolve issues of access to justice, and it is essential to simplify the litigation process and make it "citizen centric".

He also said the judiciary has been adopting technology to improve the working of courts and it is of "supreme importance" that courts are remodelled to reach out to citizens instead of them reaching out to courts in their quest for justice.

Speaking at the Constitution Day celebrations at the Supreme Court, the Chief Justice of India (CJI) said judges across the country must reflect upon the constitutional vision of securing justice, equality and liberty.

He said it is important that representation of marginalised communities and women in the legal profession and judiciary is increased.

In a nation as large and diverse as India, the "paramount challenge" the judiciary faces as an institution is to ensure that the justice delivery system is accessible to everyone, he said.

"We have been adopting technology to improve the working of courts. It is of supreme importance and necessity that courts are remodelled to reach out to people instead of people reaching out to courts in their quest for justice," the CJI said.

"To ensure that courts reach out to people, it is essential that the process of litigation is simplified and made citizen centric," he said.
Justice Chandrachud said though the judiciary's engagement with technology gained prevalence during the COVID-19 pandemic, "we must not dismantle the infrastructure but built upon it".

"I will earnestly request the chief justices of high courts to ensure that the technological infrastructure, on which public funds have been spent, is not dismantled but strengthened further," he said.

Justice Chandrachud said as the CJI, he is attempting to adopt technology based services in listing of cases and court hearings "so that institutional flaws such as delays in listing and hearing can be removed from our vocabulary".
"While technology has ably aided us in ensuring functionality of the judiciary during the pandemic, technology must be augmented with institutional reforms to resolve the chief issue of access to justice," he said.

The CJI said the first interface of people with the judicial system is the district judiciary and it is of paramount importance that it is strengthened and supported.

"The district judiciary must be lifted from the mindset of being a subordinate judiciary," he said.

Giving details of the e-initiatives launched by the prime minister, Justice Chandrachud said these initiatives reflect upon the commitment of judiciary towards providing access to justice.

"Our endeavour is to enhance access to justice. This must not be understood in narrow terms of enriching the experience of those who are already in possession of access but by reaching out to those groups and communities, that are denied basic rights," he said.

The CJI said the Supreme Court now functions in a hybrid mode which enables lawyers and parties in person to appear from different parts of the country.

He said the colonial and pre-colonial courts followed an approach of reluctance, disinclination and inaction in protecting the rights of citizens.

"All judges across courts in India, ranging from district courts to the Supreme Court must reflect upon the constitutional vision of securing justice, equality and liberty," he said.

"There is a need for us to introspect on our actions and decisions and to question our own prejudices and preconceptions. For, until we open our minds to multiple views of persons with varied lived experiences, we would be lacking in our roles as judges," the CJI said.

He said an institution thrives with time only when it functions democratically and he believes that as the CJI, it is his responsibility to collaborate and consult judges at the top court, judges of high courts, members of the district judiciary and stakeholders of the institution.

"It is crucial that we tap the experience of the diverse sections of people who are part of the judiciary," he said, adding, "That is why it is all the more important that the representation of marginalised communities and women in the legal profession and judiciary is enhanced." On the e-initiatives, the CJI said the virtual justice clock is a platform where information available through the National Judicial Data Grid is made available to the public.

The justIS mobile app 2.0 is developed for judges of district courts and it is provided to judicial officers to monitor pendency and disposal of his or her court at the handset 24X7, he said.

Justice Chandrachud said digital court is a green initiative of the Indian judiciary to make courts paperless or digital.

He said through the digital court and s3WaaS initiatives, the websites of district courts are being upgraded to a platform which is secure, scalable and accessible.

"I can assure everyone that the initiatives launched today are a part of a larger technological and institutional advancement of the Indian judiciary to ensure that even the most disadvantaged communities in the country do not stumble while reaching out to justice," he said.
The CJI appealed to youngsters to reflect on social realities of India and work towards achieving fraternity by dedicating themselves to the cause of justice in whatever way possible.

"Sometimes change happens by small acts of kindness. The heart and the soul of law, as it is administered in our courts, is our sense of compassion to our citizens," he said.