Erosion Control Top Focus Ahead Of Flood Season In Assam 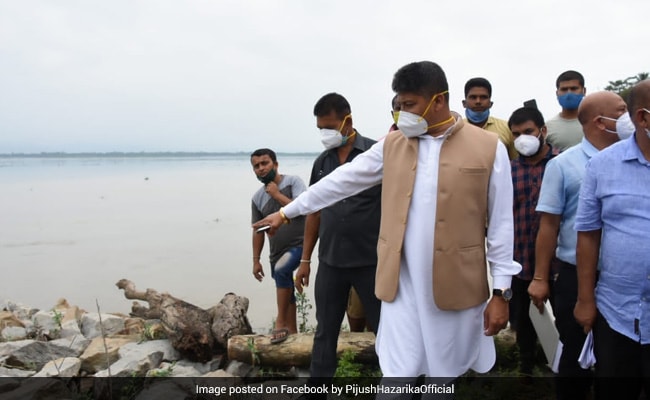 Pijush Hazarika said that the state is focused on bringing a permanent solution to the erosion issue.

Assam's Water Resources Minister Pijush Hazarika today said that bringing a permanent solution to the erosion issue is one of the state's top priorities ahead of the flood season.

Mr Hazarika, who is also the guardian minister for Biswanath district, chaired a high-level meeting at Deputy Commissioner's conference hall, and reviewed the functioning of water resources and health departments.

The minister, who said that the functioning of the water resources department "will see a vast change", instructed the officials to begin erosion-control works and projects with long-term vision.

The minister also directed officials to end all the embankment repairing works by the month of May every year. He said only temporary and emergency works should be carried out during the rainy season.

"I have noticed that there are often delays in commencing embankment repair works by the department on time; owing to which many times we fail to complete them before the rainy season. From now onwards, I have issued strict instructions to the officers of the department to work more efficiently and complete all official procedures and formalities on time so that repair works start on time," said Mr Hazarika.

The minister also asked the officials to ensure that there is no compromise with the quality of embankment repair work.

After the meeting, the minister visited erosion-hit Panpur embankment in Biswanath Chariali and inspected the ongoing repair work.

Reviewing the works of the health department, the Minister stressed on the need to expedite vaccination drive in the district.

The minister has also issued directions to create a vaccine storage facility in Biswanath district.

He issued instructions to concerned departments, including the PWD and electricity department, to build a storage facility within 10 days.

The upcoming vaccine storage facility will be situated within the premises of the Biswanath Chariali Civil Hospital.