"Entire Families" Wiped Out By Covid In Rural India: Report

Representatives from more than 18 towns and villages outlined the scale of the carnage - from entire families wiped out to bloated bodies floating down the Ganges River to farmland left untended due to a lack of workers. 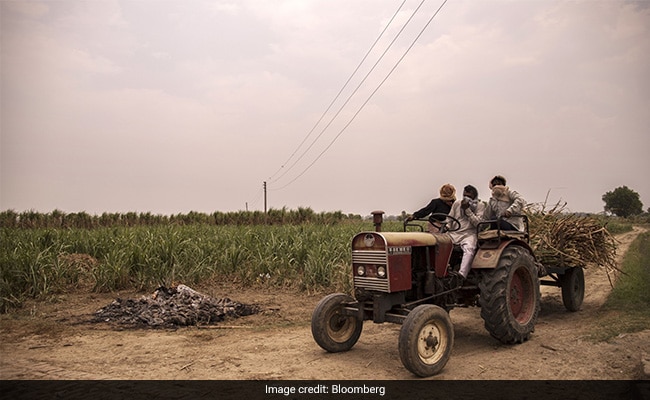 Basi near Delhi has no health-care facilities, no doctors and no oxygen canisters.

After devastating India's biggest cities, the latest Covid-19 wave is now ravaging rural areas across the world's second-most populous country. And most villages have no way to fight the virus.

In Basi, about 1.5 hours from New Delhi, about three-quarters of the village's 5,400 people are sick and more than 30 have died in the past three weeks. It has no health-care facilities, no doctors and no oxygen canisters. And unlike India's social-media literate urban population, residents can't appeal on Twitter to an army of strangers willing to help.

"Most deaths in the village have been caused because there was no oxygen available," said Sanjeev Kumar, the newly elected head of the farming community. "The sick are being rushed to the district headquarters and those extremely sick patients have to travel about four hours," he said, adding that many don't make it in time. 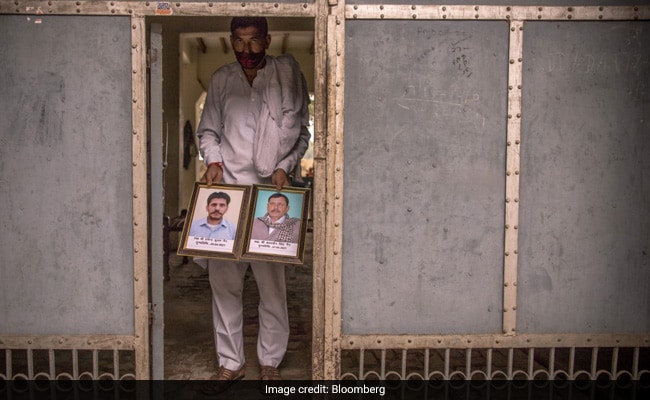 Sanjeev Kumar with portraits of Covid-19 victims in Basi, Uttar Pradesh, on May 10.

It's a scenario playing out all over India. In interviews with representatives from more than 18 towns and villages in different parts of the country, officials outlined the scale of the carnage - from entire families wiped out to bloated bodies floating down the Ganges River to farmland left untended due to a lack of workers.

Many people said the scale of the crisis is much bigger than official numbers reveal, with villagers afraid to leave their homes even if they have fevers and local authorities failing to properly record virus fatalities. India reported a record 4,329 deaths on Tuesday while its total reported cases topped 25 million, according to figures from the Health Ministry.

The sentiment on the ground suggests broader troubles for PM Modi and Yogi Adityanath, the chief minister of Uttar Pradesh who has been mentioned as a possible successor to the prime minister. The state holds elections next year. 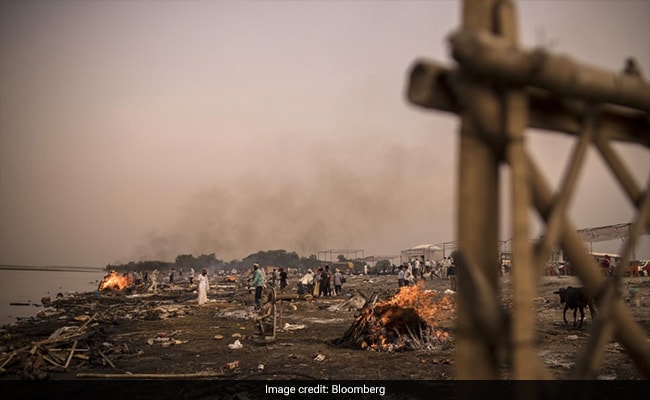 Funeral pyres burn amid mass cremations along the banks of the Yamuna river, a tributary of the Ganges, in the village of Garh, Uttar Pradesh, on May 4.

"We had complete support for PM Modi and Yogi Adityanath, but now whatever happens we will vote the BJP out," Sahab Singh, 72, said in the center of Basi, which was virtually empty. He noted people were too scared to leave their homes.

During the recent election to appoint village heads, many poll workers became infected - including Kumarsain Nain, 59, who caught the virus along with his 31-year-old son. Unable to walk and gasping for breath, Nain's family rushed him last month to a nearby hospital after they were unable to find an ambulance with oxygen support, said another son, Praveen Kumar.

"After we reached the hospital, the doctors said he had died, but instead of recording Covid-19 as the cause of death they put cardiac arrest," Mr Kumar said. "The doctor told us there was no need to check whether my father was Covid-19 positive since he was already dead."

His brother died soon afterward in another clinic about 30 minutes away, at the same time as six other patients who were also on oxygen support. "My suspicion is that hospital ran out of oxygen, which led to the deaths," Mr Kumar said. "Holding the elections when the government knew that cases were rising and the infection was spreading is a criminal act." 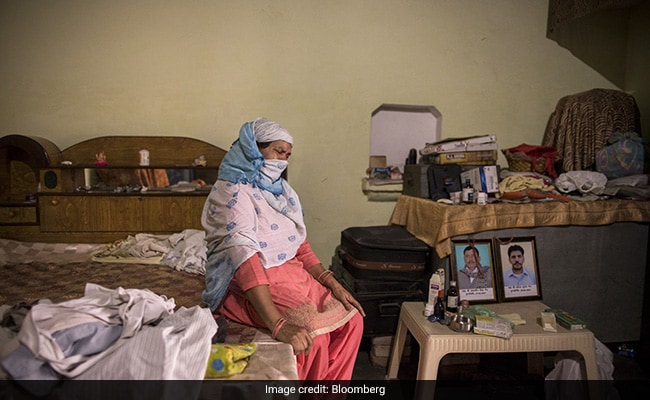 Suresh Devi, the wife of Kumarsain Nain at her home.

Representatives from both the Prime Minister's Office and the Health Ministry have not responded to request for comment. PM Modi addressed the issue on May 14 following a meeting with several chief ministers. "I want to warn you about corona. The infection is spreading fast in villages," the Prime Minister said. "Efforts are being taken to deal with this."

Baijayant "Jay" Panda, a senior official with BJP, told Bloomberg Television on Monday the latest virus wave has been a "humbling experience," but pointed to a significant vaccination rollout and the provision of shots to more than 80 countries in a global outreach effort.

He defended PM Modi's response, saying election authorities made the decision to proceed with polls and states were responsible for building oxygen plants that received federal funding.

"It's not just the prime minister who thought we had overcome the biggest ravages of corona - the consensus in India by early January was that we had done so," Mr Panda said. "Many of the epidemiologists who are today criticizing are on the record back in October saying the worst was over and that we should not have as many restrictions." 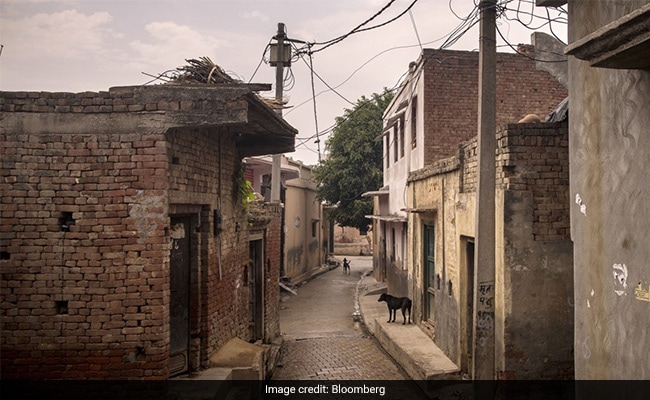 Covid-19 is adding to PM Modi's troubles along with a severe economic downturn, rising unemployment and farmer protests against a law perceived to favor big business, according to Nikita Sud, an associate professor in international development at the University of Oxford and author of a book on Hindu nationalism.

"It is too simplistic to say that Covid mismanagement spells the turning of the tide for the Modi regime," Sud said. "However, the regime looks out of its depth for the first time since coming to power in 2014.

As leaders in Delhi struggle to contain the crisis, horrifying scenes are playing out across India. Last week in Bihar, residents woke up to find as many as 70 bloated bodies floating in the Ganges River. With crematoriums overflowing as the number of deaths surge, they feared these bodies were Covid victims whose families could not properly lay them to rest. More corpses have since been reported along the river.

Both the federal and state governments "have failed us all," said Rajesh Sharma, who owns a travel company in the Hindu pilgrimage city of Ujjain in the central state of Madhya Pradesh.

"India had a full year to prepare, but except for sending vaccines out of the country for personal credit and glory nothing much was done," he said. "There are no hospital beds, no medicines. People have been left to die. In Ujjain and around, entire families died in the last two weeks." 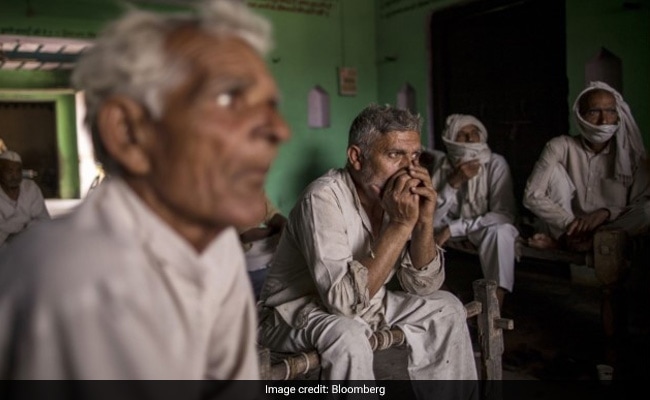 Citizens discuss how to handle the growing pandemic; locked gates of the village's closed health center.

In Punjab local authorities are asking volunteers among the country's one-million-strong Accredited Social Health Activists to visit every house to urge people to get vaccinated and see if anyone has a fever. While the group is well known for working in harsh conditions to deliver childhood immunizations and basic first aid to villages, the scale of the current crisis is unprecedented, said Balbir, one of the workers.

"Many people are so scared they are not even telling anyone about their fever," she said, asking to be identified by only her first name due to fear of a backash from local authorities in Ludhiana district, where infections are spreading rapidly. "Despite such a huge surge they have still not given us adequate protection: no masks, no gloves, nothing." 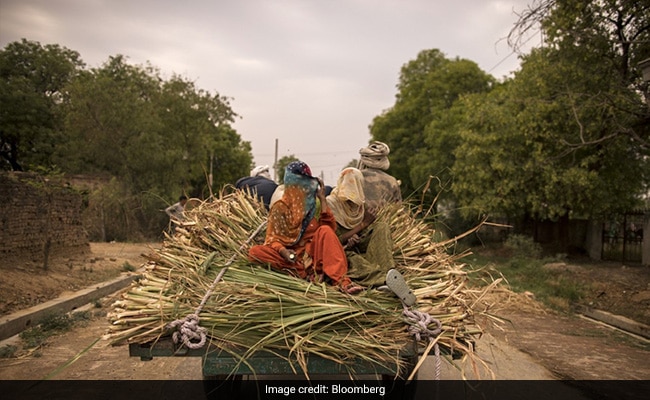 Uttarakhand has also been hit hard. The state saw virus cases jump almost 20 times after it hosted more than nine million people for the Kumbh Mela between March 31 and April 24.

"There isn't a house in Rishikesh where people aren't sick - Haridwar is also in a similar condition," said Navin Mohan, who helps arrange tours to the holy towns on the banks of the Ganges.

"The pandemic is now truly beyond control," Mohan said. "Thousands are dying and will die in the next few weeks. The government is fudging numbers, but the reality is visible to everyone."