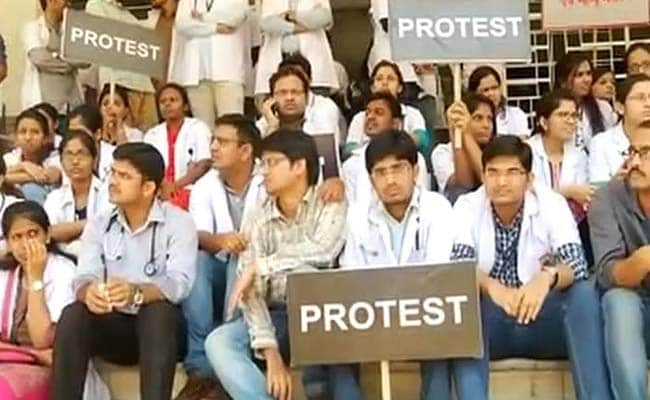 MUMBAI: Thousands of doctors on strike for five days in Maharashtra got their last warning on Friday from Chief Minister Devendra Fadnavis who told the assembly that the doctors had stretched things too far and would face "legal action" if they didn't resume work soon.

"Enough is enough," the Chief Minister said hours before the government's meeting with the striking doctors. This is going to be the last attempt at resolving the stand-off before the government decides to crack the whip. Mr Fadnavis said the government had already fulfilled "all their demands" but the doctors were passing the buck. "If doctors don't return to work, we will take appropriate legal action," he told lawmakers.

Over 3.500 resident doctors in the state have been on strike since Sunday after one doctor was beaten up by a patient's relative, triggering a huge medical crisis across the state. The doctors initially wanted better security but later seemed to have added more demands to their list including a pay hike.

Promoted
Listen to the latest songs, only on JioSaavn.com
"Jo log doctors ko maarte hain aur jo log rogiyon ko maarte hain unme kya farak hai ye mujhe bataiye (Tell me, what is the difference between the people who beat doctors and those who kill patients (by not attending to them)," the Chief Minister said, wondering why doctors too should not be booked when people are dying due to the strike. "We respect doctors but they should not stretch it too far," he said.

Earlier this week, the Mumbai High Court that is hearing a petition on the strike too had given the doctors a tongue lashing, telling them that they should resign if they did not want to work. "You are not factory workers that you will resort to such protests. Shame on you. How can doctors behave in such a manner?" the court had observed.