The encounter comes two days after two terrorists were gunned down when they tried to attack the police in the Kralhaar area of Baramulla district in north Kashmir.

The Kulgam encounter started when terrorists fired at security forces during a search operation. (AFP)

Six people died and over 40 were injured when an explosive shell went off at an encounter site in Jammu and Kashmir's Kulgam, the police said on Sunday. The unexploded shell was lying at the site and went off after a house caught fire during the encounter. The people, who had rushed in to douse the flames, got hit when the shell exploded, the police said.

"Six people have been killed. We are trying to find out how it happened and what kind of explosive it was," said Swayam Prakash Pani, Inspector General of Police.

The police are not sure what kind of explosive led to the tragedy. It could either be a grenade brought by the dead terrorists or mortar shell used by security forces during the operation. Even after the blast, the police didn't visit the spot because of the ongoing clashes in the area. 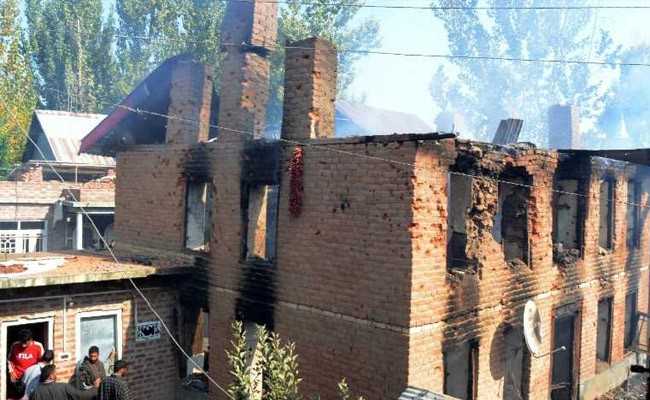 Several people had sustained injures during the clashes, which started soon after the encounter. (AFP)

Civilians rushing in at encounter sites have become almost a norm in the Kashmir Valley. Despite repeated requests, the security forces have not been able to stop the practice. After Sunday's deaths, former Chief Minister Mehbooba Mufti tweeted:

Extremely saddened by the news of kulgam incident , where civilians were once again caught in the cross fire of violence , thus adding fuel to the already volatile situation . All words of condemnation ,condolence sound very hollow at this tragedy .

Separatists have blamed the security forces for the deaths and called for a statewide shutdown today.

"To strongly condemn and protest the mayhem unleashed in Kulgam, in which five civilians and three armed youth were killed and scores of others injured, the Joint Resistance Leadership calls for a complete shutdown tomorrow. We will hold a protest sit-in at Lal Chowk on Tuesday," All Parties Hurriyat Conference leader Mirwaiz Umar Farooq tweeted.

Three terrorists were killed in Sunday's encounter, which started after the police received a tip-off about their presence in the area. Two soldiers had been killed in the gunbattle.