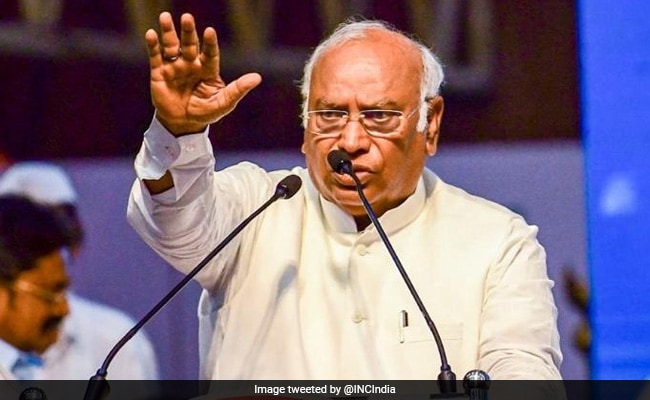 Mallikarjun Kharge made the comments during an election rally in Narmada district. (File photo)

The scathing remark comes after Mr Kharge took a swipe at PM Modi terming him a "leader of lies".

"Congress is a party of elitist dynastic philosophy and mentality. The question is whereafter the party that talks about love apologizes or do they support such statements made by the party leaders," said BJP spokesperson Shehzad Poonawalla, according to ANI.

"The Congress party cannot fathom that a person who has come from the poorest circumstances has become the Prime Minister and is taking the country to greater heights," said Mr Poonawalla.

The BJP spokesperson called out the Congress party for insulting the Prime Minister and said that president Mallikarjun Kharge is acquiring the sentiments of Congress's first family.

"This is not a 'Sahyog' rather this is 'Prayog' and 'Udhyog' of abusing Prime Minister Modi personally. Congress president Mallikarjun Kharge is acquiring the sentiments of congress first family," he said while talking to ANI.

Earlier in the day, the Congress chief accused the BJP and its top leaders of resorting to prevarications in order to gain the sympathy of the people.

Addressing an election rally in Dediapada in Narmada district, Mr Kharge said, "They ask us, especially Modiji and Shah (Amit shah) what the Congress has done in 70 years. If we have not done anything in 70 years then you wouldn't have democracy in the country."

"A person like you (PM Modi) claims to be poor. I am also poor, I am one of the untouchables. People drank your tea, nobody would've had my tea. Then you say that you are poor and somebody abuses you. If you say it for sympathy then people have become smarter now. If you lie once or twice people will hear but how many times will you lie? He's the leader of lies..."