Election 2019: Defamation vs Defamation In AAP-BJP Pamphlet War Ahead Of Delhi Vote

Lok Sabha Elections 2019: On Thursday, Gautam Gambhir's rival Atishi broke down at a press conference called by the AAP, where leaders displayed a pamphlet full of religious and sexist attacks on the candidate.

The spat between the Aam Aadmi Party and the BJP in Delhi intensified two days before the capital votes in the Lok Sabha election, amid a raging row over derogatory posters on the Aam Aadmi Party's star candidate Atishi. Cricketer-turned-politician Gautam Gambhir said he will sue Delhi Chief Minister Arvind Kejriwal, his deputy Manish Sisodia and Atishi after they accused him of circulating the offensive pamphlets on her.

He has sent a defamation notice to the AAP trio demanding their apology. Later, the AAP also sent a notice to Mr Gambhir over defamatory statements made in the pamphlet.

In a defamation notice sent through Union Finance Minister Arun Jaitley's daughter Sonali Jaitley to the three AAP leaders, Mr Gambhir demanded that they withdraw their "false statements" and apologise for making "baseless allegations" against him and said he will file a case of defamation against them if they don't.

"If you're truthful, you can always take the legal route. If they have any proof against me, they can file a case against me. I will answer in court," he told NDTV this morning.

Mr Sisodia had said his party would send him a notice for defamation today, "How is he filing a defamation case? We are the ones being defamed, we will file a defamation case against him. We will try to send a defamation notice to him today. His party has endorsed the pamphlets and he has not questioned that," the Delhi Education Minister had told NDTV.

On Thursday, Atishi broke down at a press conference called by the AAP, where leaders displayed a pamphlet full of religious and sexist attacks on the candidate. "If Gambhir can stoop so low to defeat a strong woman like me, how can he ensure security for women as an MP?" asked the 37-year-old Oxford alumnus.

Today, she filed a complaint against her BJP rival with the Delhi Commission For Women.The women's body had asked the police whether it had filed a First Information Report or FIR over the circulation of the derogatory pamphlets.

Have been overwhelmed by the support and solidarity that has come forward from all over the country! I came into politics to fight against injustice; and this sickening pamphlet has only strengthened my resolve # 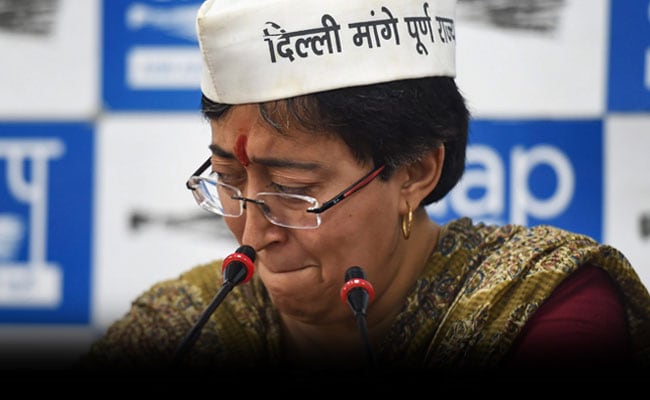 Lok Sabha Elections 2019: AAP's Atishi broke down at a press conference over derogatory pamphlets on her were distributed in East Delhi.

Mr Gambhir, 37, also pledged to quit politics, even if it meant resigning the day he won the election, if AAP proved its charge. "But if you don't have any proof, will you retire from politics?" he asked Mr Kejriwal.

He also said he never suggested that it was AAP that circulated the pamphlets and demanded an investigation.

Gautam Gambhir joined the BJP in March and was chosen as the BJP's East Delhi candidate for the national election. He faces Atishi of the AAP and Arvinder Singh Lovely of the Congress.

The escalation in the AAP-BJP war took place as campaigning tapered down for voting in Delhi on Sunday for the national election. All seven seats of Delhi are with the BJP.

Today is the last day of campaigning in the capital. The votes will be counted on May 23.