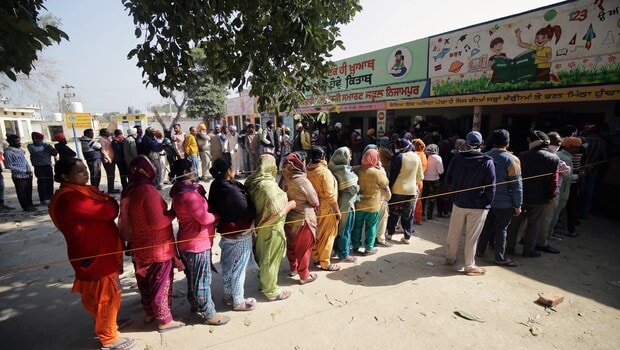 UP polls and Punjab polls results will be declared on March 10.

Nearly 70 per cent polling was recorded till 5 pm in the assembly elections in Punjab, while in the third of the seven phase polls in Uttar Pradesh, it was over 61 per cent, according to official data. Polling was held in these states from 8 am to 6 pm, but both have released voting data only till 5 pm.

The average voter turnout for the single-phase elections to the 117-member assembly in Punjab was 69.65 per cent, while in Uttar Pradesh, where 59 constituencies went to polls in phase three, it was 61.61 per cent, according to 5 pm voting percentage data updated by the Election Commission's Voter Turnout App at midnight.

Results for the assembly elections of Punjab and Uttar Pradesh will be declared on March 10 along with that of Goa, Manipur and Uttarakhand.

While in Uttar Pradesh, as many as 627 candidates are in contest in the third phase of the polls to the 403-member assembly, in Punjab, 1,304 candidates contested the elections.

Data for Punjab showed that Mansa district recorded a maximum voter turnout of 77.21 per cent while Mohali recorded the lowest at 62.41 per cent.

The Talwandi Sabo assembly segment recorded the highest turnout of 83.67 per cent while Amritsar West seat recorded the lowest at 50.10 per cent, it stated.

The Voter Turnout App showed that in Uttar Pradesh, highest voting till 5 pm was recorded at 69.61 per cent in Lalitpur and lowest at 56.14 per cent in Kanpur Nagar.

While the Shiromani Akali Dal (SAD) contested the polls in alliance with the Bahujan Samaj Party (BSP), the BJP fought the elections in alliance with Amarinder Singh-led Punjab Lok Congress and Sukhdev Singh Dhindsa-led SAD (Sanyukt).

The Election Commission (EC) restrained actor and philanthropist Sonu Sood from visiting polling booths in Moga in Punjab following complaints that he was trying to influence voters. His vehicle was also impounded by police, said officials.

However, Sood, who denied the charges, alleged that other candidates were trying to buy votes. His sister Malvika Sood Sachar is a Congress candidate from Moga.

In Uttar Pradesh, Samajwadi Party (SP) chief Akhilesh Yadav contested from the Karhal assembly seat in the third phase. He was up against BJP leader and Union Minister S P Singh Baghel.

In this phase, the SP chief's uncle Shivpal Singh Yadav contested from his traditional Jaswantnagar seat. Among the other prominent faces in the fray were BJP's Satish Mahana (Maharajpur in Kanpur) and Ramvir Upadhaya (Sadabad in Hathras), and Louise Khurshid, who is contesting on the Congress ticket from Farrukhabad Sadar.

Louise Khurshid is the wife of senior Congress leader Salman Khurshid. Meanwhile, Kanpur Mayor Pramila Pandey and former BJP office-bearer Nawab Singh have landed in trouble for posting videos in which they are seen casting their vote inside polling booths.

The EC has banned the use of mobile phones inside polling stations.

Ms Pandey took her mobile phone inside the polling booth at Hudson School and clicked a selfie while voting, following which an FIR was lodged against her, a senior official said. The mayor has shared a video that has gone viral on social media platforms.

District Magistrate Neha Sharma said the Kanpur mayor has violated the rules of the EC by revealing the name of the party she voted for.

Former city president of BJP's Yuva Morcha, Mr Singh, was also allegedly caught while violating rules. He took a mobile inside a booth and shot a video while casting vote.

The Samajwadi Party has alleged that one of its agents was beaten up by a BJP worker in Shikohabad in Firozabad district in the presence of police.

The party tweeted from its official Twitter handle, "SP's election agent is being beaten up by BJP people in presence of police at booth number 158 of Shikohabad Vidhan Sabha of Firozabad district." The SP has asked the EC to cognisance of the matter.