Election 2019: Shashi Tharoor Thanks Rajnath Singh For Phone Call After His Head Injury

Shashi Tharoor, 63, remained active on social media despite being admitted in hospital and getting six stitches on his head. He was back on the campaign trail after he was discharged. 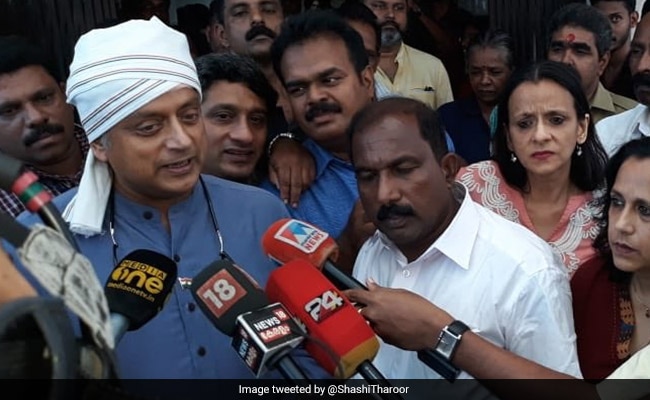 Congress leader Shashi Tharoor, who is recovering from a head injury that he suffered during a temple ritual on Vishu, thanked Home Minister Rajnath Singh for giving him a phone call to enquire about his health.

"Thank you @rajnathsingh for your call. I am touched by your concern. By the grace of God I am well enough to be back in action," Mr Tharoor tweeted.

Shashi Tharoor, 63, remained active on social media despite being admitted in hospital and getting six stitches on his head. Replying to Rajasthan Chief Minster Ashok Gehlot's wishes on Twiter, Mr Tharoor said he is "well on the mend and back in action". He was discharged from hospital yesterday and was back on the campaign trail.

Several other leaders too reached out to the Congress leader, who was expected to file his nomination on April 14. He thanked Kerala Chief Minister Pinarayi Vijayan and senior Left leader Sitaram Yechury too for their phone calls.

Mr Tharoor was injured on Monday during a ritual called ''thulabharam'', in which a person is weighed against flowers, grains, fruits and similar items in temples and the equal value or quantity is offered as donation. While he was sitting on one of the pans of the weighing scale, the hook came off and its iron panel fell on his head.

Touched by the gesture of @nsitharaman, who dropped by today morning to visit me in the hospital, amid her hectic electioneering in Kerala. Civility is a rare virtue in Indian politics - great to see her practice it by example! pic.twitter.com/XqbLf1iCR5

Mr Tharoor is the sitting lawmaker in Thiruvanthapuram since 2009 and is aiming for a third term in the three-cornered fight between the Congress, the Left and the BJP. Former Mizoram Governor Kummanam Rajasekharan is the BJP candidate.

Head bandaged and covered in a traditional mundu, he joined Congress president Rahul Gandhi in his campaign in the state capital yesterday. The Congress leader won his boss's praise for joining him despite his injury.

Kerala will vote in a single phase on April 23 in the seven-phase national election. Results will be out on May 23.