Eid ul Fitr 2019 India: Lakhs of Muslims offered prayers at Eidgahs or open grounds and mosques in the twin cities of Hyderabad and Secunderabad and in other towns of Telangana and neighbouring Andhra Pradesh. 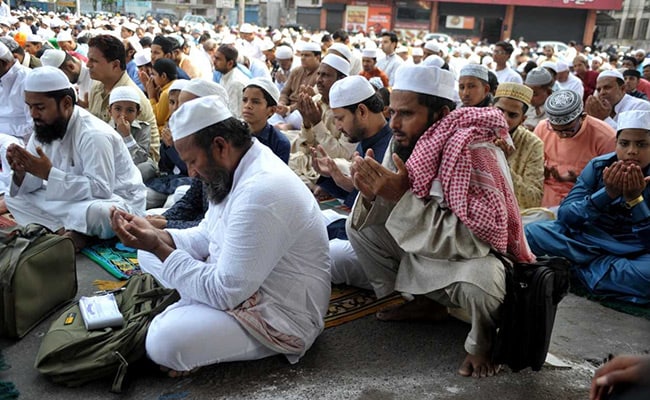 Men and children thronged Eid Gah Bilal ground in Hyderabad since morning for the Namaz-e-Eid.

Eid-ul-Fitr, marking the end of the Muslim holy month of Ramadan, was celebrated with religious fervour and gaiety across Telangana and Andhra Pradesh on Wednesday.

Lakhs of Muslims offered prayers at Eidgahs or open grounds and mosques in the twin cities of Hyderabad and Secunderabad and in other towns of Telangana and neighbouring Andhra Pradesh.

Attired in new clothes and wearing skull caps, men and children thronged the venues since morning for the Namaz-e-Eid.

The Imams or priests in their sermons urged Muslims to continue the good deeds of Ramadan and to have empathy towards the poor and the society at large.

The priests also made dua (supplication) for universal peace.

A festive mood prevailed in Muslim neighbourhoods as people greeted each other.

Eid was celebrated with religious fervour in other parts of Telangana. Major congregations took place in the towns of Warangal, Karimnagar, Nizamabad, Adilabad, Nalgonda and Mahabubnagar.

After a month-long fasting, Muslims began the celebrations with prayers and greeted each other as well as people from other communities.

Before offering prayers, every Muslim family paid Fitra or charity (Rs 100) on behalf of each member so that the poor can also celebrate the festival.

Well to do families also paid Zakat or 2.5 percent of Islamic tax on their wealth to the poor and needy.

Guests were treated to sheer khorma (special sweet made of vermicelli, milk and dry fruits) and other dishes.

The shopping for Eid continued throughout the night and till Saturday morning. Markets around historic Charminar in the old city and other parts of the city were alive even at night.

Muslims form 12.43 per cent of Telangana's population of over 3.50 crore. They constitute about seven per cent among the over five crore population of Andhra Pradesh.

(Except for the headline, this story has not been edited by NDTV staff and is published from a syndicated feed.)
Comments
TelanganaAndhra PradeshHyderabad

"Severe Curbs Can Cause More Deaths Than Virus": Expert To Rahul Gandhi