Eid-al-Adha In Jammu And Kashmir: The Home Ministry said large prayer congregations were seen at many places of Kashmir valley including Baramulla. 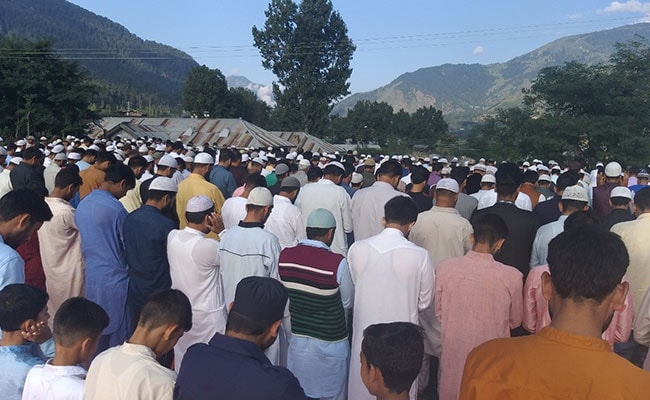 The festival of Eid-al-Adha went peacefully in Jammu and Kashmir on Monday, the government said, sharing photos of the mosques in and around Srinagar and the size of the congregation in surrounding towns. But the mood was subdued as the streets of Srinagar remained deserted under the watchful eyes of the security personnel.

In a statement, the Home Ministry said large prayer congregations were seen at many places of Kashmir valley including Baramulla, where 10,000 people gathered, and in Bandipora, around where 5,000 people took part in the prayers.

In the evening, senior city police officer SP Pani said there were a "couple of minor localised incidents" which were "handled very professionally". "In these incidents, there is only a couple of injury reported and otherwise situation in the entire valley is normal," he added.

The state administration reiterated its denial of the city witnessing any major protest as reported by a section of the media, saying "not a single bullet has been fired by the security agencies".

"There have been some reports in the media about firing by security agencies and deaths... The police carried out a detailed briefing and I would like to reiterate and categorically deny that any firing incident has happened in Jammu and Kashmir," the state's Principal Secretary Rohit Kansal said.

Jammu and Kashmir had been under a lockdown since August 4 ahead of the government's move to end the special status of the state and bifurcate it into two union territories. More than 50,000 security personnel are on streets and phone service and internet are still off. The state's mainstream leaders, including former Chief Ministers Mehbooba Mufti and Omar Abdullah have been under arrest since.

The government said restrictions have been completely lifted in five districts and limited to the night. "Similar local relaxation was done in the nine other districts of Kashmir based on local assessment of the situation," a statement read.

In his speech to the nation on Friday on his Jammu and Kashmir decisions, Prime Minister Narendra Modi had assured that the people of the state would not face any trouble in celebrating Eid and that the situation in the valley would return to normal gradually.

He also said statehood will be returned to Jammu and Kashmir, when the situation improved.

The party has claimed that the centre's move was "illegal".