Addressing a campaign rally in poll-bound Gujarat, he also said that when he introduced the bill for abrogating Article 370, opposition leaders began to shout like crows in Parliament. 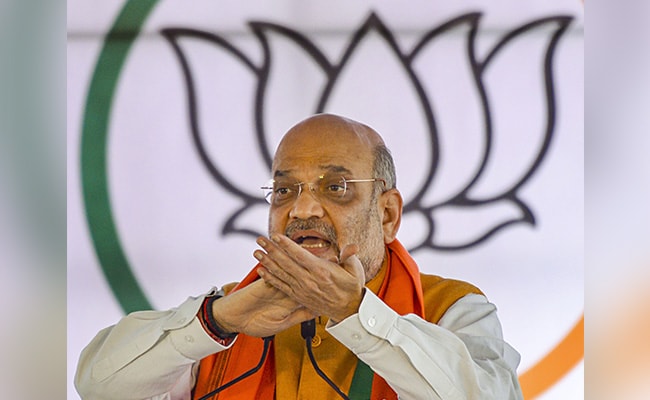 Addressing a campaign rally in poll-bound Gujarat, he also said that when he introduced the bill for abrogating Article 370, opposition leaders began to shout like crows in Parliament.

Mr Shah was speaking at Thasra town in Kheda district where voting for the Gujarat Assembly elections will be held on December 5, in the second phase.

"At that time (during the coronavirus pandemic), Congress's Rahul Gandhi, through a tweet, used to warn people against vaccine saying do not take it because it is `Modi vaccine' and it could harm you. But thankfully, no one takes him seriously nowadays," the BJP leader claimed.

"After realising that everyone had taken it, he secretly got himself vaccinated "when no one was watching," Mr Shah added.

"When Congress leaders were busy doing politics during the pandemic, Prime Minister Narendra Modi worked hard to keep the people of Gujarat safe," he added.

"In Gujarat, Congress did nothing except making Hindus and Muslims fight each other. The BJP government eliminated riots in Gujarat. Such riots benefit neither Hindus nor Muslims. Such violence only hinders development," the Union minister said.

Riots took place often during the Congress rule, he alleged.

"But after Narendra Modi took stringent action against rioters in 2002, Gujarat has never seen a curfew till today. The BJP has established peace in Gujarat," Mr Shah claimed.

Referring to the abrogation of Article 370 which had granted a special status to Jammu and Kashmir, Shah said leaders of the Congress, Samajwadi Party, the Left and Mamata Banerjee's party started "shouting `kow kow' (like crows) in Parliament" as soon as he introduced the bill for discussion.

Later in the day, Mr Shah addressed another rally in support of BJP candidate at Garbada town in the tribal-dominated Dahod district.

PM Modi was "an elder brother of tribals", he said, adding that the BJP government in Gujarat has allocated Rs 1 lakh crore for the development of tribals.