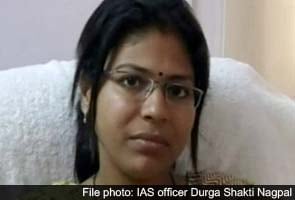 Lucknow: The Uttar Pradesh government has served a chargesheet to IAS officer Durga Shakti Nagpal whose suspension last weekend has triggered a national debate and generated much political heat.

Ms Nagpal was shunted out as the Sub-Divisional Magistrate of Gautam Budh Nagar for ordering the demolition of a wall of a mosque being built illegally on government land. The Akhilesh Yadav government justified the move, saying her action threatened communal tension. But supporters of the 28-year-old officer say she was victimised for cracking down on the sand mining mafia in the state.

The 10-page chargesheet has accused Ms Nagpal of flouting the norms laid down for ordering the demolition, adding that the young bureaucrat should have first served a notice before bringing down the wall. The officer has been asked to file a reply within 15 days.

A copy of the chargesheet has been sent to the Centre along with a copy of her suspension order which had been sought earlier from the state government. (Read)

The move came in the backdrop of Congress President Sonia Gandhi writing to the PM, asking him to "ensure that the officer is not unfairly treated." (Read letter)

Promoted
Listen to the latest songs, only on JioSaavn.com
The letter, seen as a veiled indictment of the state government, provoked a sharp reaction from the ruling Samajwadi Party, a key ally, which questioned why the Congress chief hadn't written similar letters when a senior IAS officer in Haryana was taken to task for alleging irregularities in land deals involving her son-in-law and businessman, Robert Vadra.

The issue is now threatening to mar Congress' ambitious Food Security Bill, with the SP saying "it will vote against the legislation in its present form." The government, which is technically in minority, will need the support of Samajwadi Party's 22 MPs to get the bill passed in Parliament.