Central to that focus is the $3 billion defense deal the US and India signed on this visit, which will boost India's naval strength in waters where China is seeking greater leverage. 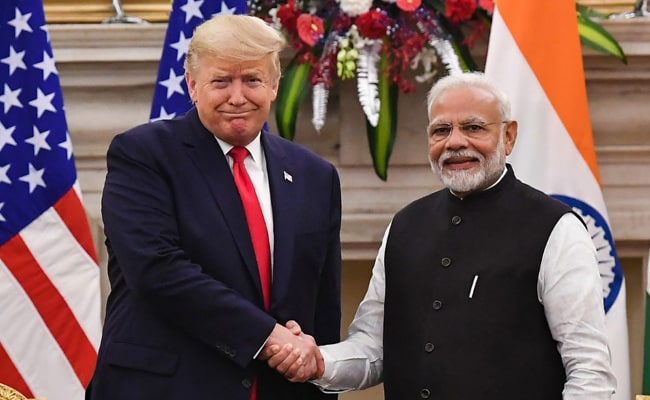 US President Donald Trump touted "tremendous progress" on a trade deal with India as he sought to strengthen ties with a country key to American efforts to blunt China's influence in Asia.

Officials have tried to hammer out a modest trade deal opening up India to US agricultural products and medical devices in return for the restoration of preferential export status that Trump stripped from India last year. There was an expectation that a mini-deal would be unveiled before the US President's visit, but Trump has since said he's in no hurry to finalize it.

"I'm optimistic we can reach a deal that will be of great importance to both countries," Mr Trump said on Tuesday while sharing a stage with Prime Minister Narendra Modi in New Delhi.

The momentum on trade appeared to pave the way for closer strategic relations, as the US looks to court India as a counterweight to China. Mr Trump lauded increased security ties with India and showered praise on PM Modi, who has faced deadly protests -- including during the Mr Trump's visit -- over the new citizenship law.

Central to that focus is the $3 billion defense deal the two nations signed on this visit, which will boost India's naval strength in waters where China is seeking greater leverage. Donald Trump also highlighted the revamped "Quad" -- a group involving the US, India, Japan and Australia -- that's taking on greater significance as the perceived threat of a more dominant China continues to grow.

"Together the prime minister and I are revitalizing the quad initiative," Mr Trump said, noting expanded cooperation between the four nations on maritime and cyber security was vital "to ensure a free and open Indo-Pacific."

"We discussed importance of a secure 5G wireless and the need for this emerging technology to be a tool for freedom, progress and prosperity -- not to do anything where it could be even conceived as a conduit for suppression and censorship," he said.

The US has tried to persuade other countries not to use Huawei equipment in emerging 5G networks, but the effort has faltered due to a lack of competing technology.

"Both the United States and India want to see an Asia that isn't dominated by any one power," Alyssa Ayres, who served as deputy assistant secretary of state for South Asia during the Obama administration and is now at the Council on Foreign Relations, told Bloomberg TV. "That has been a pillar underlying a lot of the strategic and defense cooperation that's grown so well over the course of the last recent years."

Last week, India's cabinet cleared a $2.6 billion purchase from Lockheed Martin Corp. of 24 multi-role MH-60R Seahawk maritime helicopters to the Indian navy. The US State Department has also approved a potential sale to India of $1.8 billion in arms, including air-defense radars and missiles, rifles and other equipment, the US Defense Security Cooperation Agency announced.

Still, the clock is ticking for the nations to resolve their differences on trade, said Tanvi Madan, a senior fellow in the Project on International Order and Strategy in the Foreign Policy program, and director of The India Project at the Brookings Institution in Washington, DC.

"If they don't resolve the trade question the friction will eventually spill over into the security side," Ms Madan said.

Just hours before Donald Trump arrived in Delhi on Monday evening violent clashes broke out in the national capital's northeast, as rival groups protested the country's contentious religion-based citizenship law. Police fired tear gas to disperse the protesters and imposed curfew-like restrictions across the area, with demonstrators both for and against the law throwing stones and setting vehicles and shops on fire, television footages showed.

The protests continued to simmer on Tuesday and the Press Trust of India reported the death count in the violence had risen to seven.

The new religion-based citizenship act, which was passed by an overwhelming majority in Parliament, fast-tracks citizenship for religious minorities from three neighboring countries, but excludes Muslims. Protesters say the law undermines India's secular constitution while the government says its aim is to protect persecuted minorities. The push back against the law has been the most significant challenge for Prime Minister Narendra Modi since he first came to power in 2014.