"Tariff King" India Wants Trade Deal With US To Keep Me "Happy": Trump

Donald Trump described India as a "tariff king" as he reiterated his allegations that New Delhi has a high tariff rate on various American products. 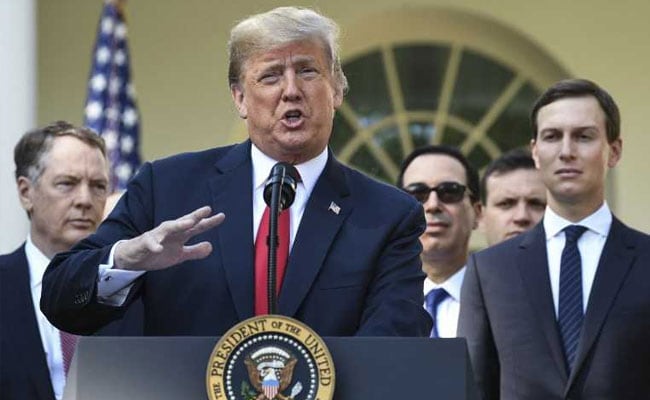 India wants to start trade talks with the US "immediately", US President Donald Trump said

India wants to start trade talks with the US "immediately", US President Donald Trump said on Monday at a press conference to announce a trade deal struck between the United States, Mexico and Canada.

Slamming India for "high tariffs" on American products, Mr Trump said India wanted the trade deal primarily "to keep him happy", news agency PTI reported. He also listed out trade deals that are under negotiations, including with Japan, European Union, China and India.

The US President described India as a "tariff king" as he reiterated his allegations that New Delhi has a high tariff rate on various American products.

After he warned against imposing similar tariffs on import of Indian products, Mr Trump said Indian negotiators called him that they want to have a trade deal with the US.

The negotiations are being carried out by the US Trade Representatives Robert Lighthizer, PTI reported,

Last week, Mr Trump had said India wants to have a trade deal with the US because it does not want him to retaliate.

Donald Trump has often accused India of imposing 100 per cent tariffs on American products. "We have a country, take India. Good relationship. They want to make a deal now because they don't want me to do what I'm going to do, with I have to. So, they (Indians) call us. They didn't want to make a deal with anybody else," he had said.

Last month, Mr Trump had said India wanted a trade deal with the US despite the US administration's tough stance on the issue. "Take India. You talk about free trade. So, let's say they (Indians) charge us 60 per cent tariff on a product. And for the same product when they send it in (America), we charge them nothing. So now I want to charge them 25 per cent or 20 or 10 or something," he had said.

The US is already fighting a major trade battle with China, with both imposing tariffs and counter-tariffs on a range of high-volume goods.

(With inputs from AFP, PTI)