On his way to Ahmedabad too, US President Donald Trump had tweeted in Hindi, a first for the President who is fond of tweeting. 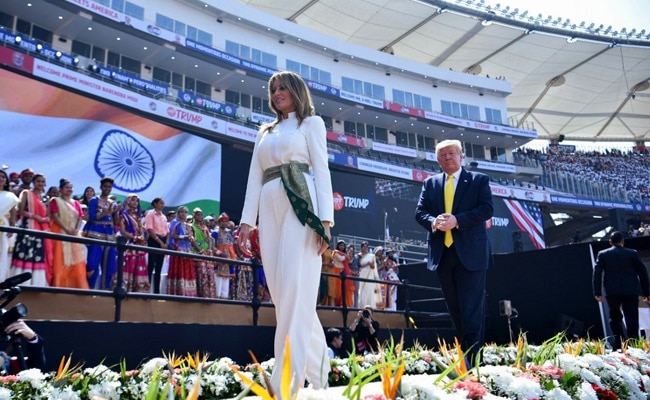 Donald Trump put out a second tweet in Hindi shortly after he addressed a packed stadium in Ahmedabad, saying the US President and First Lady Melania Trump travelled to all the away to India to deliver a special message to Indians. In his address, he had described Prime Minister Narendra Modi as his special friend and quipped: "He is a great leader. Everybody loves him, but he's very tough."

"The First Lady and I travelled 8,000 miles around the world to deliver a message to every citizen of this country. America loves India, America respects India and America's people will always remain loyal friends with India's people," Mr Trump tweeted in Hindi.

On his way to Ahmedabad too, Mr Trump had tweeted in Hindi, a first for the President who is fond of tweeting. "We are eager to visit India. We are on our way, will see you all in a few hours," said his tweet in Hindi script.

Donald Trump and his family arrived a little before noon in Ahmedabad in PM Modi's home state Gujarat. PM Modi received Mr Trump and First Lady Melania Trump outside the presidential jet Air Force One, and hugged the American president. On the first day of his 36-hour visit, President Trump spent most of the day in Gujarat's largest city with Prime Minister Modi.

Speaking at the "Namaste Trump" event, Mr Trump called PM Modi a "tough negotiator" as he talked about a "fantastic trade deal" between the two countries. The statement came against the backdrop of tense talks over trade between India and the US.