The independence of every institution has been "compromised" under the "fascist" BJP government, MK Stalin said in a tweet Sunday night. 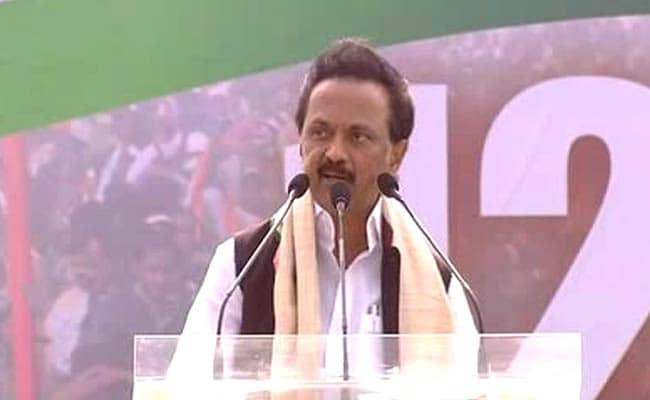 Mamata Banerjee has embarked on a sit-in protest, MK Stalin and many others are supporting her

DMK president MK Stalin has lent support to West Bengal Chief Minister Mamata Banerjee in her face-off with the CBI, saying he was with the TMC chief in her ''fight'' to "save democracy."

The independence of every institution has been "compromised" under the "fascist" BJP government, he said in a tweet Sunday night.

"The independence of every institution has been compromised under this fascist BJP Government. I stand with @MamataOfficial Didi in her fight to protect the federal structure of this country and to save democracy. #SaveDemocracy," Mr Stalin said in the tweet.

Mr Stalin, Leader of Opposition in Tamil Nadu, had earlier attended a mega rally organised by the TMC supremo in Kolkata last month, against the BJP-led NDA government at the Centre.

In a dramatic showdown with the Centre, Ms Banerjee has embarked on a sit-in in Kolkata to protest "insults" she faced at the hands of Prime Minister Narendra Modi and BJP chief Amit Shah.

She went on the protest Sunday night, hours after a CBI team that had gone to question Kolkata Police Commissioner Rajeev Kumar in connection with chit fund scams was detained in a rare face-off between the police establishments of the Centre and the state.