Soldiers of the Indo-Tibetan Border Police, who guard the country's 2,488-km de-factor border with China, celebrated Diwali at a height 17,000 feet in Ladakh's sub-zero temperatures. 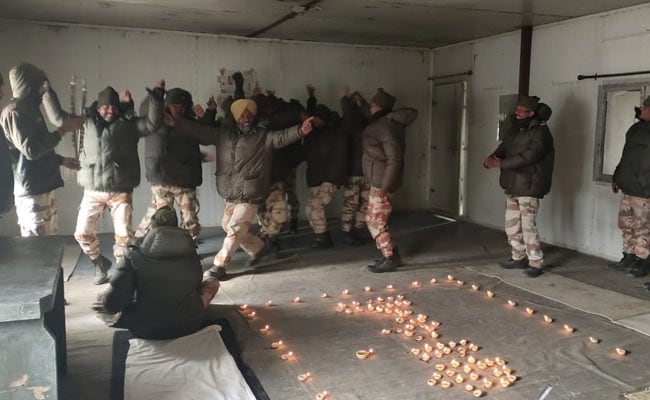 Diwali 2020: Soldiers of Indo Tibetan Border Force celebrated Diwali at a height of 17,000 feet in Ladakh

Soldiers of the Indo-Tibetan Border Police (ITBP) celebrated Diwali at a height 17,000 feet in sub-zero temperatures of Ladakh. Jawans of the paramilitary force guard the country's 2,488-km-long de-factor border with China, or the Line of Actual Control.

The ITBP soldiers did puja, lit diyas, followed by celebratory dancing at a post in Ladakh where the temperature is minus 20 degree Celcius. The temperature here even goes down to minus 40 degrees as winter sets in.

#ITBP jawans celebrate #Diwali at 17000 feet in #Ladakh where temperature is minus 20 degrees ! pic.twitter.com/4YGuMQk2lA

On Friday, Prime Minister Narendra Modi had appealed to the nation to light a diya, a traditional earthen lamp, on Diwali for the soldiers guarding India's borders.

"This Diwali, let us also light a Diya as a salute to soldiers who fearlessly protect our nation. Words can't do justice to the sense of gratitude we have for our soldiers for their exemplary courage. We are also grateful to the families of those on the borders," PM Modi had tweeted.

Continuing his tradition of spending Diwali with soldiers, PM Narendra Modi arrived in Jaisalmer's iconic Longewala today, where he hit out at China's "expansionist" forces that show a "distorted mindset which belongs to the 18th century".

The comment comes a day after 11 people, including five soldiers, were killed in ceasefire violations by Pakistani troops in several areas of northern J&K.

Last year, the Prime Minister visited J&K's Rajouri district to celebrate Diwali with soldiers guarding the Line of Control. Before that, he has spent the festival of lights with soldiers in Uttarakhand's India-China border, north Kashmir's Gurez sector, ITBP post in Himachal Pradesh, Indo-Pak border in Punjab, and Ladakh's Siachen.