Dharna? We can do one too: BJP lawmakers take on Arvind Kejriwal over Somnath Bharti 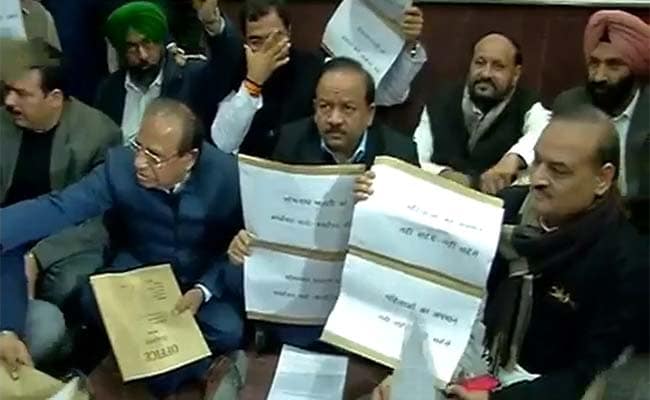 New Delhi: The tables were turned today as Chief Minister Arvind Kejriwal faced a protest on his turf by BJP lawmakers who demanded his controversial Law Minister Somnath Bharti's resignation.

All 32 Delhi BJP MLAs, led by Dr Harsh Vardhan, came to Mr Kejriwal's office at the Delhi Secretariat and sat outside for two hours shouting slogans and holding placards that read "Respect the Constitution" and "Sack Somnath Bharti."

Mr Kejriwal once came out and promised to look into their letter of demands. He was also overheard telling Dr Harsh Vardhan lightly "milke karenge doctor saab (we'll do it together)."

But the BJP was not amused, and though the MLAs wound up their protest outside the Chief Minister's office, they warned that they would next go to President Pranab Mukherjee against Mr Bharti.

"We had given the government time till 26th (Sunday) to remove Somnath Bharti. He has insulted the judiciary, executive, policemen, media...The whole country is ashamed of him. How is he being allowed to continue?" said Dr Harsh Vardhan.

The BJP pointed out that there was no restriction that they were violating, a swipe at Mr Kejriwal, who had defied a ban on large gatherings to stage a dharna, or sit-in, near top government offices in the centre of Delhi exactly a week ago. (Read constitution, dharna by Chief Minister not unconstitutional, says Arvind Kejriwal)

For 33 hours, Mr Kejriwal had refused to negotiate with the Delhi Police and even threatened to disrupt Republic Day celebrations if Home Minister Sushil Kumar Shinde did not act against police officers who refused to follow the orders of Aam Aadmi Party ministers.

The BJP and the Congress have raised strong demands for Mr Bharti's sacking over his raid targeting African nationals in his constituency and a series of intemperate comments for which he was admonished by AAP leaders. ('Dear Chief Minister, sack Somnath Bharti': Pressure on AAP to act against Law Minister)
Comments
BJP MLAs dharnaArvind KejriwalSomnath BhartiHarsh VardhanDelhi Secretariat