In the 2019-20 budget, the Uttar Pradesh government had allocated Rs 600 crore for cow welfare. Of this, Rs 450 crore was earmarked for the construction and upkeep of cattle shelters.

Shelter caretakers say nutritious food for the cattle under their care is very hard to come by.

When four calves died at a state-run cattle shelter in East Uttar Pradesh's Ballia district two days ago, tehsildar Shiv Sagar Dubey was one of the first to arrive at the scene. Through a mobile phone video, he then confirmed what his superiors in the administration have been denying for a long time: the calves had died of starvation.

"I can't find any trace of disease on the dead calves. They have died due to lack of fodder, and I can see that no arrangements have been made here. This is a big misuse of the Uttar Pradesh government's provisions," Mr Dubey can be heard saying in the video.

His claim has brought into focus an escalating crisis in cattle shelters across Uttar Pradesh despite the Yogi Adityanath government spending crores on cow protection and welfare. Things had come to a head last year, when frustrated farmers began locking up stray cattle in government buildings to prevent them from running amok in their fields.

In the 2019 -20 budget, the state government allocated an unprecedented Rs 600-crore for cattle welfare as opposed to the Rs 500 crore earmarked for improving the infrastructure of primary and higher primary schools. It included Rs 250 crore for the construction and upkeep of cattle shelters in rural areas, besides an additional Rs 200 crore for the same work in urban regions. A liquor cess was expected to generate additional revenue of Rs 165 crore to feed the bovines. 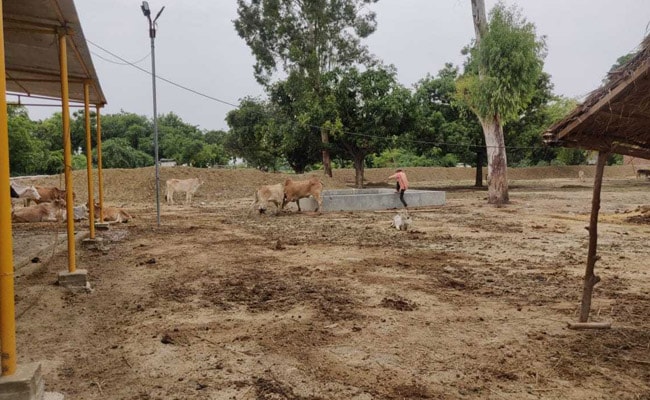 Many animals are believed to have died in cattle shelters across Uttar Pradesh over the past week.

However, the numbers don't seem to add up on the ground. Images of dead cows in state-run cattle shelters across Mirzapur and Ayodhya from the past week have sparked outrage, forcing the government to suspend eight officials and issue warnings to others across Uttar Pradesh. Although some reports suggest that 300 bovines died across the state over the previous week, no official figures have been released yet.

A cattle shelter in Barabanki's Safdargunj, 30 km from Lucknow, lost eight cows over the last one week. An inquiry is on, with the government saying that some of them could have died of old age.

However, 45-year-old Shankar - one of its two caretakers - says that procuring nutritious food for the 116 cows at the shelter is a downright challenge. "This shelter needs a 50-kg sack of bran every day to mix with the fodder and make it nutritious - even edible. But we got just two sacks over the last one month," he adds.