Read inOther Languages
This Article is From Dec 22, 2018

The Lok Sabha is expected to take up the triple talaq Bill for discussion on December 27 during the ongoing winter session of Parliament. 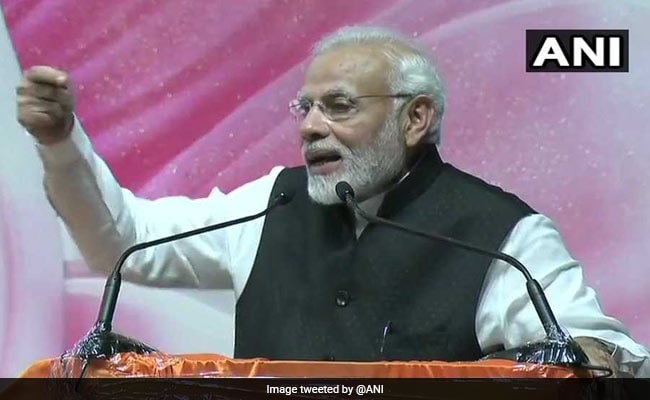 Prime Minister Narendra Modi today said the government is committed to making a law on triple talaq despite facing "hurdles" and resistance.

Speaking at the fifth national convention of the Bharatiya Janata Party (BJP) Mahila Morcha in Gujarat's Gandhinagar, PM Modi targeted the Congress, saying women's welfare was never a priority of the previous governments.

The Lok Sabha is expected to take up the triple talaq Bill for discussion on December 27 during the ongoing winter session of Parliament.

The government had issued an ordinance in September pending the passage of the Bill in a revised form.

The current Bill will supersede a previous Bill passed in the Lower House and held up in Rajya Sabha. In view of opposition to the Bill from various parties, the government has cleared some amendments, including introduction of a provision of bail for husbands who give instant triple talaq.

"We are committed so that Muslim women can get rid of a big life threat. No just that. In order for Muslim women to go to Haj (pilgrimage), we have removed the clause that men need to accompany them," PM Modi said.

The prime minister said the women of the country have given the BJP the opportunity "with great hope and trust after trying all other options".

"After exploring various options in the last six to seven decades, the people of the country -- our sisters and daughters -- reposed faith in the BJP. Previous governments did not do anything to provide even basic facilities to women and just made promises," he said.

"The country knows what their intentions and thoughts were. The political party that remained in power since decades only waited for time to come to bring about social changes and thinking regarding women. They were busy making promises," PM Modi said, targeting the Congress.

In the last four years, society's view towards the girl child and women empowerment has undergone a positive change, the prime minister added.

"18 crore of the total Jan Dhan bank accounts belong to women," he said, adding that the male-female sex ratio has also improved, especially in Haryana, which has had a dubious record in the past.

PM Modi said the cabinet committee on security affairs for the first time included two women. "Besides, women have been inducted as fighter pilots in Air Force. There is a woman officer wing in the Navy. The government passed anti-trafficking bill and capital punishment will be given to rape convicts of minors," he said.