The women say after they hung an anti-CAA banner from their balcony during the BJP chief's campaign - organised to drum up support for the contentious law - a mob came up and asked them to step out.

Surya Rajappan says she was not served a formal eviction notice by the landlord.

Protesting the Citizenship Amendment Act (CAA) during BJP chief Amit Shah's door-to-door campaign in Delhi's Lajpat Nagar area on Sunday led to the eviction of two women lawyers from their rented apartment. The women say after they hung an anti-CAA banner from their balcony during the BJP chief's campaign - organised to drum up support for the contentious law - a mob came up and asked them to step out. "At that point, the banner was not up. So all they could have done after entering our home is harm us," Surya Rajappan, one of the two women, told NDTV.

"As soon as people noticed our banner, they started shouting at us, and the landlord and his family were part of the protest, so they were also shouting at us. They said- 'take this banner off and get out of our house right away'. After we pulled down the banner, some people came up to our house, they - our landlord was part of the mob- were banging our doors and kept saying 'get out'," she said.

Ms Rajappan says she was not served a formal eviction notice by the landlord. She also alleges that misogynistic remarks questioning her character were made.

"We haven't received a formal notice, but at that point, they had screamed it out from the road, and after an hour later when my dad was there, they told him he should take away his daughter right away. Obviously, misogynistic comments were made, questioning our character and our upbringing. Since I am a woman, my character had to be questioned," she said.

They have vacated the house. 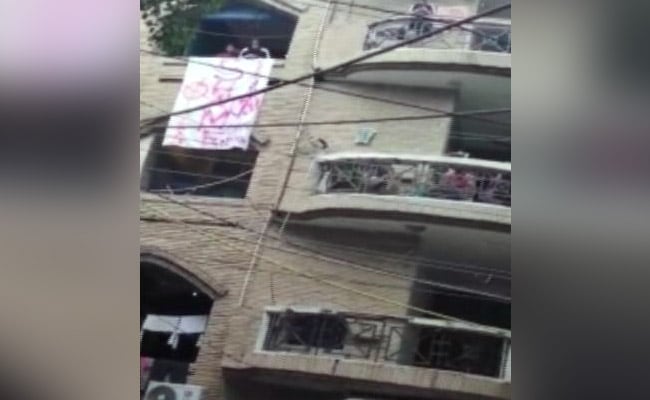 "There was space for both the both of us. We are a democracy. It is not that only anti-CAA protests are happening at Jantar Mantar. There are pro-CAA people who tried to disrupt things. The difference between there and here is that the protesters didn't turn against those people. Here it was frightening for us as the protesters turned against us and our landlord turned against us," she added.

She said it must be realised that the country is a democracy, and the Constitutional right of dissent cannot be challenged.

The Citizenship Amendment Act, for the first time, makes religion the test of citizenship in India. The government says it will help minorities from three Muslim-dominated countries to get citizenship if they fled to India because of religious persecution before 2015. Critics say it is designed to discriminate against Muslims and violates the secular principles of the constitution.

Violent protests had broken out last month after the bill was passed in both the houses of parliament. The ruling BJP had alleged that the Opposition was misleading people on the law.