The violence erupted after an anti-citizenship law protest in the area shifted to a location under the Jafrabad Metro Station, partially blocking the road.

21 people have died and over 200 are injured in the violence since Sunday.

The distance from Jafrabad to Maujpur, two neighborhoods in Delhi's northeast, is not long, barely a kilometre, but it is a fraught journey.

It was the epicentre of the first round of violence that erupted on Sunday, spiralling outwards, engulfing at least seven localities in the vicinity in the next three days.

The road is strewn with fragments of bricks and of burnt vehicles.

Very few want to speak to the media.

Midway between the two areas, we come across a knot of men standing behind a barricaded gate. They let us in. They tell us in this pocket there was peace. It is a mixed mohalla, they say.

Siraj Ahmed, a local businessman, said, "This is the last street (in this area) which is mixed after which on this side (pointing towards Jafrabad) all of them are Muslims and on that side (pointing further east towards Maujpur) are all Hindus."

Shehzad, who is in the garments business, says, "Everyone remained awake for the whole night" to ensure peace. "Both communities guarded each other," he said.

Mukesh Kumar, also a local, nodded in agreement. He said violence of this kind has never erupted in this area before.

"Everyone lives in brotherhood," he said.

They say they barricaded the gate of the mohalla to stop mobs from entering.

The violence erupted after an anti-citizenship law protest in the area shifted to a location under the Jafrabad Metro Station, partially blocking the road. 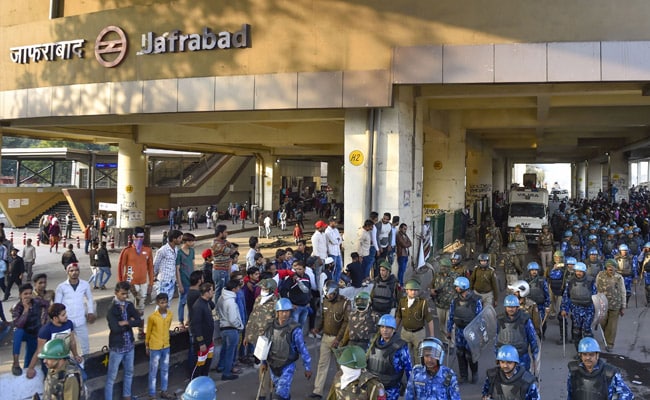 Soon afterwards, BJP leader Kapil Mishra issued a warning at Maujpur chowk saying his supporters will take the law into their own hands if the police do not clear the sit-in.

"Protests are going on for months and there has never been violence. Suddenly Kapil Mishra comes and says this and that," Shehzad said.

We are told the area has a temple, mosque and a gurdwara.

"The violence was done by outsiders. Eid, Diwali, Guru Purab - everything is celebrated here and no communal feelings have ever arisen in our hearts," Shehzad told us.

27 people have died and over 200 are injured in the violence since Sunday.