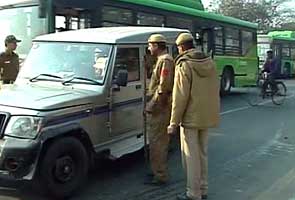 New Delhi: Delhi was under a blanket of security on the Republic Day today as thousands of armed personnel kept a tight vigil while Unmanned Aerial Vehicles and helicopters scanned the city from above.

Snipers with sophisticated arms and binoculars were on rooftops while hundreds of police personnel kept the eight km parade route from Rajpath to Red Fort under their watch to ensure that nothing untoward happened.

Around 35,000 police personnel, including 15,000 from paramilitary forces and elite National Security Guards (NSG) were deployed across the city in the run-up to the national celebrations.

A senior security official said the UAVs of the Air Force were deployed for surveillance besides the usual deployment of helicopters. "The UAVs not only kept an eye on the parade route but entire Delhi," the official said.

Mobile hit teams, anti-aircraft guns and sharpshooters of the NSG were also on the job at various places while paramilitary and Delhi Police commandos kept a close watch along the route.

Snipers were on top of the high-rise buildings while around 100 CCTVs kept a tight vigil on people's movement between Rajpath and Red Fort, the route of the parade which showcases India's military might and cultural diversity.

"There was a special emphasis on anti-sabotage checks, access control measures and intelligence coordination. The entire route of the parade was covered by special security and anti-terror arrangements.