According to the US local media of the total detainees at Oregon, 52 of them identified themselves as Sikhs or Christians from India. 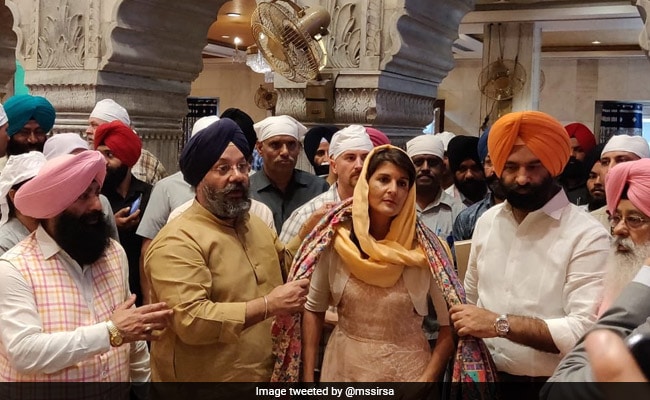 US envoy to UN Nikki Haley is on a two-day visit to India visited Gurudwara Sis Ganj Sahib.

The Delhi Sikh Gurudwara Management Committee (DSGMC) took up the issue of 52 Indians, mostly Sikhs, being held at a detention centre in the US state of Oregon for being part of a large contingent of illegal immigrants seeking asylum there with the US envoy to the United Nations Nikki Haley.

BJP legislator and DSGMC General Secretary Manjinder Singh Sirsa interacted with Ms Haley while she was visiting Gurudwara Sis Ganj Sahib here along with the US Ambassador to India, Kenneth Juster.

The BJP legislator posted a series of tweets about his meeting with Ms Haley, who is on a two-day visit to India, the first after she became the US envoy to the UN.

"We are humbled to have @nikkihaley Ji and @USAmbIndia paying obeisance at Gurdwara Sis Ganj Sahab. We requested Nikki Ji to address the problem of 52 Indians detained in Oregon Jail. @nikkihaley Ji immediately took note and discussed it with @USAmbIndia to resolve the issue. We will be meeting Mr Ken Juster soon to discuss the matter in detail," he tweeted.

Ms Haley, who is the daughter of Sikh immigrants from Punjab, also prepared rotis for langar at the gurudwara.

"Meeting @nikkihaley Ji & @USAmbIndia has been a humbling experience. They both keenly did Langar Sewa. Nikki Ji conversed in Punjabi also. I would always cherish her joy on seeing Deg, getting Karah Parshad and mentioning her childhood & mom's cooking," Mr Singh tweeted.

According to the local daily 'The Oregonian', of the total detainees, 52 identified themselves as Sikhs or Christians from India.

They alleged that they fled from their country because of religious persecution from the Hindu majority.