On Delhi Gurudwara Visit, Nikki Haley Made Roti For Langar

She offered prayers at Jama Masjid in Delhi 6. She also visited the Gauri Shankar Temple in the national capital

Nikki Haley and US Ambassador to India Kenneth Juster were seen stirring huge cauldrons of prasad.

United States Ambassador to the United Nations Nikki Haley, who is touring India to strengthen ties between the two countries, visited several places of worship in Delhi, a day after she said "freedom of religion was as important as freedom of people".

On her first visit to India since becoming the US envoy to UN, Ms Haley's first stop this morning was the Gauri Shankar Mandir. From there, she headed to Delhi 6 and offered prayers at the Jama Masjid. Later, she interacted with people outside the mosque.

The daughter of Sikh immigrants from Punjab, she also visited Gurudwara Sis Ganj Sahib in Chandni Chowk. Among the historical gurudwaras of Delhi, the Sis Ganj Gurudwara is of great religious significance for the Sikh community. As part of the community service, she rolled chapatis for 'langar' at the gurdwara's kitchen and was also seen stirring a huge cauldron of prasad, food served among devotees. US Ambassador to India Kenneth Juster lent a helping hand.

A tour of the Central Baptist Church was also part of her itinerary.

The Delhi Sikh Gurudwara Management Committee (DSGMC) discussed with her the issue of 52 Indians, mostly Sikhs, being held at a detention centre in Oregon for being part of a large contingent of illegal immigrants seeking asylum there. 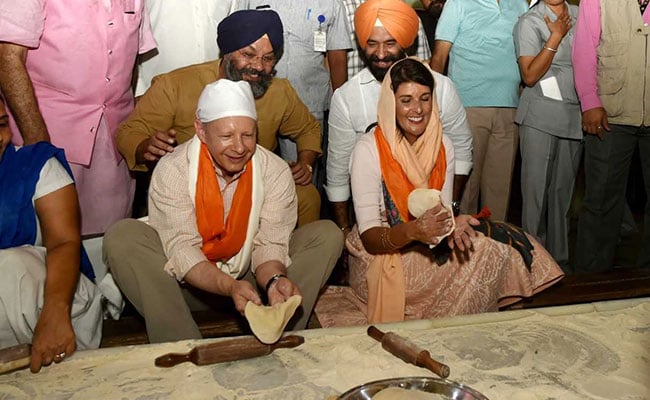 Ms Haley kick-started her three-day tour of India with a visit to the majestic tomb of Mughal emperor Humayun. "We think freedom of religion is just as important as freedom of rights and freedom of peoples," she had said.

She met Prime Minister Narendra Modi on Wednesday and discussed ways to enhance cooperation between the two countries, including on counter-terrorism.

During her meeting with Foreign Minister Sushma Swaraj, ways to deepen the Indo-US strategic partnership and the ongoing cooperation between the two countries at the UN were discussed.

"I am here to once again solidify our love for India, our belief in the friendship that India and the US have and our willingness to make that relation even stronger. In this day and time we see more and more reasons for India and the US to come together," she said.

The 46-year-old diplomat, who is the highest-ranked Indian-American in US President Donald Trump's administration, will also meet top officials, NGO representatives among others and discuss a host of topics including India-US strategic ties and significant global developments.

Ms Haley had last visited India in 2014 when she was the South Carolina Governor.