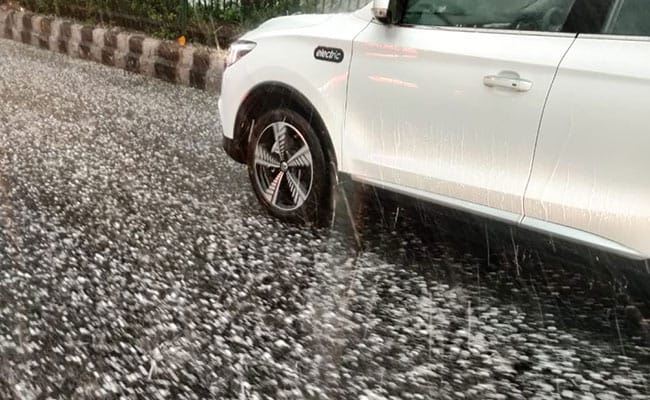 Rain and hailstorm that lashed the national capital on Saturday afternoon was the second highest single-day rainfall in March since 1992, causing traffic snarls in many parts of the city due to waterlogging.

During the day, the IMD predicted that while a large part of the country may receive light to moderate rain in the next 24 hours ending 1 p.m. on Sunday, the week ahead will be dry barring the Western Himalayan region.

According to the IMD, there will be a drastic reduction in the thunderstorm over Bihar and Jharkhand.

"Though the moisture feed from the Arabian Sea has been cut off with the eastward movement of the system, low-level southeasterly winds from the Bay of Bengal are feeding moisture towards eastern India, where the upper-level features are also conducive for development of thunderstorms and hailstorms," it said.

According to the IMD, this feature is likely to shift further eastwards by Sunday leading to a drastic reduction in the thunderstorm over Bihar, Jharkhand, north Chhattisgarh and West Bengal and increase over the northeastern states.

It said light to moderate fairly widespread rainfall was likely over Punjab and eastern UP and scattered rainfall over Haryana, Chandigarh, Delhi and western UP during the next 24 hours and decrease thereafter. "Hailstorm with gusty winds is also likely over the same region," the IMD said.

Apart from this, till Sunday afternoon, moderate scattered to fairly widespread rainfall with isolated thunderstorm and hailstorm, lightning and gusty wind winds will be witnessed over north Chhattisgarh, Bihar, Jharkhand, West Bengal and Sikkim. "Isolated heavy falls are also likely over Jharkhand and Bihar," the IMD said.

There would be no significant change in minimum and maximum temperatures in the next 2-3 days.