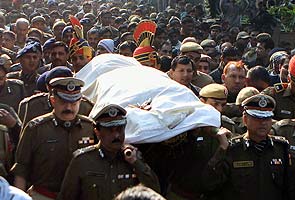 Police have sent notices to both the witnesses - Yogendra and Paoline - in connection with the investigations into the case. Medical Superintendent of Ram Manohar Lohia Hospital Dr TS Sidhu has also been asked to join the probe after he said Mr Tomar did not suffer any external or internal injury.

A controversy has erupted over the cause of death of the constable during violent demonstrations with eyewitnesses last Sunday and a government hospital claiming there were no injuries on his person while the post mortem report contradicted these versions.

The Delhi Police had yesterday released excerpts of report of the post mortem done by a Board of Doctors in the government Ram Manohar Lohia Hospital, where he died on Tuesday.

"Myocardial infarction (cardiac arrest) and its complications that could be precipitated by multiple
ante-mortem (before death) injuries to neck and chest produced by blunt force impact," Delhi's Additional Commissioner of Police KC Dwivedi had said quoting from the report as the cause of 47-year-old constable's death.

However, two eyewitnesses claimed that they did not spot any injuries on his person when they tried to revive him after he collapsed near India Gate on Sunday during violent protests against the gang-rape of a girl in a moving bus on December 16.

Promoted
Listen to the latest songs, only on JioSaavn.com
Dr Sidhu said there were "no major external injury marks except for some cuts and bruises...In all our records, there are no severe internal injuries recorded but the post-mortem will tell everything."

Yogendra and his friend Paoline, who had rushed Mr Tomar to the hospital, contradicted police version that he was beaten up by protesters leading to his death. He fell down on his own, they said.