The Blue Line of the Delhi Metro connects Dwarka, in South West Delhi to Noida and Vaishali in Uttar Pradesh. 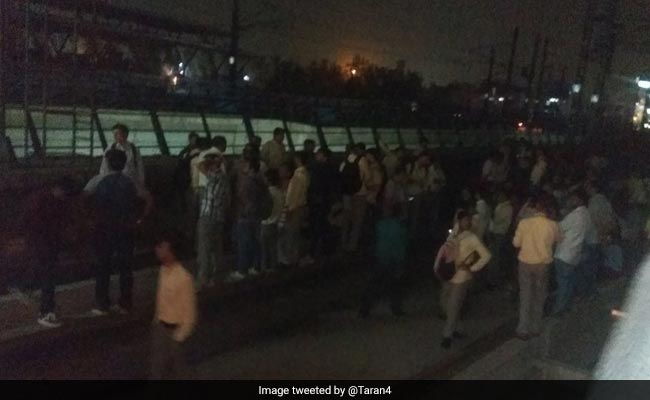 New Delhi: Train services on Delhi Metro's Blue Line were briefly suspended between Dwarka Sector 21 and Janakpuri West due to a protest by Metro rail staff on Thursday night. The employees of the Delhi Metro stopped work after a station manager at the Dwarka station was allegedly beaten up by a few Central Industrial Security Force (CISF) personnel, who guard the stations, after an argument over a minor issue, officials said.

The incident led to a suspension of services shortly after 9 pm and prompted the CISF to order an inquiry into the alleged assault.

According to sources, the incident at around 12:30 pm was triggered by an argument that ensued when a tyre of a vehicle apparently belonging to the CISF was "deflated" since it was parked in an "unauthorised zone" outside the premises of Dwarka Sector 21 station, news agency PTI reported.

"A CISF personnel then asked a DMRC (Delhi Metro Rail Corporation) staff as to why was it done. The staff told him that since it was parked illegally, the station manager had ordered to deflate the tyre," a source said.

"That CISF staff, along with a couple of other personnel, then went to the room of the station manager and thrashed him," the source alleged.

Due to the issue, services on Dwarka Sector 21-Janakpuri West section were affected for a while.

"The services on Blue Line from Dwarka Sector 21 to Janakpuri West were put on hold temporarily from 9:10 pm onwards due to DMRC staff agitating over the assualt (by CISF personnel) issue," the DMRC later said.

The services were resumed around 9:45 pm, it said.

Many commuters tweeted images and videos of stranded people at stations.

DMRC staff has stopped metro services on blue line. Issue is some fight between DMRC and Delhi police. Huge inconvenience at sec 21 Dwarka. No trains running.@HardeepSPuri@DelhiMetro_Rail@DelhiMetro_@ArvindKejriwalpic.twitter.com/WJH5aqslB4

#Delhimetro I am in metro at dwarka Station metro suddenly stop. It's a long time no information from metro whats the reason behind suddenly stop! I am on my way to home from office but it's long time metro not started.. Look into this..

"A complaint has been lodged on the matter by the DMRC and the CISF is taking up the issue departmentally also. Senior officers from both the DMRC and CISF had to intervene to sort out the issue," a senior DMRC official said.

A CISF spokesperson, when contacted said, "An inquiry has been ordered and action will be taken based on its findings."

The spokesperson, however, claimed that the station manager had "verbally abused" the CISF personnel before the assault incident took place.

A senior CISF official said, they would try to resolve the issue amicably.

Nearly 30 lakh people use the Delhi Metro each month. The Blue Line of the Delhi Metro connects Dwarka, in South West Delhi to Noida and Vaishali in Uttar Pradesh. Dwarka Sector-21 is the terminal station of the busy Blue Line.

Promoted
Listen to the latest songs, only on JioSaavn.com
Services on the line from Janakpuri West to Noida City Centre and Vaishali were running normal, a DMRC official said.