Delhi Court Shootout: The high court had on September 30 initiated on its own a petition concerning security at courts in the national capital following the September 24 shootout at Delhi's Rohini Court. 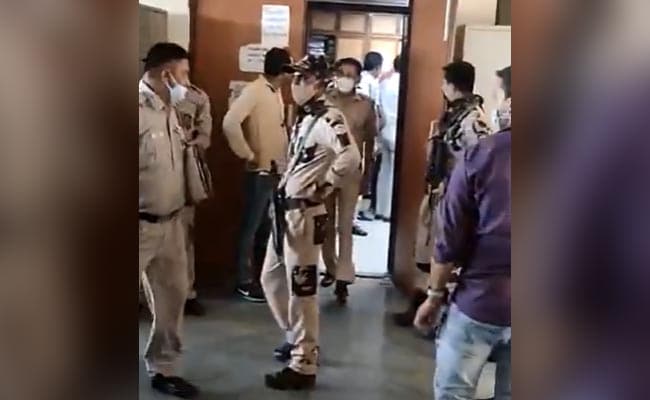 Delhi Police told the Delhi High Court today that it has filed suggestions on maintaining security at courts in view of the recent shootout that killed three people in a Rohini courtroom in the national capital.

A bench of Chief Justice DN Patel and Justice Jyoti Singh asked other stakeholders, including the Centre, Delhi government and various bar associations to also their give suggestions so that they could be incorporated in the order.

"All other respondents shall file a report or affidavit on suggestions which shall be incorporated in our order for the safety of advocates and all others appearing in courts in Delhi," the bench said while listing the matter for further hearing on October 12.

Additional Solicitor General Chetan Sharma, representing the Centre and Delhi Police, said the police has filed its suggestions on the issue.

The court also issued fresh notices to various bar associations in Delhi and asked them to file their reports.

The high court had on September 30 initiated on its own a petition concerning security at courts in the national capital following the September 24 shootout at Delhi's Rohini Court.

The court had said there was a need for proper and effective deployment of a sufficient number of police personnel in courts.

Delhi Police, in its status report filed through Delhi government standing counsel Santosh Kumar Tripathi, made several suggestions including that use of technology should be maximised and physical presence of parties ought to be resorted to in extreme and compelling circumstances.

It also said identity cards of lawyers who enter the court premises should be checked and only authorized vehicles should be allowed inside the premises after proper checking with security equipments.

The police also said that security gadgets, installed at court premises are outdated and they shall be replaced with high resolution CCTV and monitors, 360 degree vehicle scanning with RF Tag/ bar code reader facilities, scanners for luggage and bag checking, scanners for explosive and NDPS checking.

The high court had earlier issued notice to the Delhi Police, Delhi government, and Central government, as well as the Delhi High Court Bar Association, and directed that suggestions in the form of an affidavit or a report be filed on the issue of maintaining security at courts.

The bench had said that there was a need for a fool-proof entry system in courts, installation of metal detectors, under vehicle surveillance system, CCTV cameras at strategic points, and proper training of police personnel as well as a regular meeting of all stakeholders.

Jailed gangster Jitendra Gogi and his two assailants posing as lawyers were killed inside the Rohini courtroom on September 24 in a dramatic shootout that also saw the police fire bullets in retaliation, the officials had said.

Video footage of the incident showed policemen and lawyers rushing out in panic as gunshots rang out inside courtroom number 207.

The two gunmen dressed as lawyers are suspected to be members of rival Tillu gang, an official had said, adding that over 30 shots were fired.

On September 24, Chief Justice of India NV Ramana had expressed deep concern over the shootout inside the crowded Rohini courtroom and spoke to the Delhi High Court Chief Justice in this regard and advised him to talk to both police and the Bar to ensure that the functioning of the court is not affected.