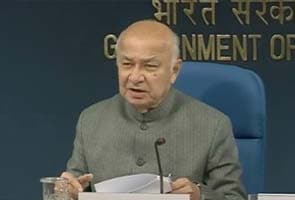 New Delhi: Home Minister Sushil Kumar Shinde has said an inquiry has been ordered into Delhi Police lapses in investigating the disappearance of the five-year-old girl who was found brutally raped, and attempts to hush up the matter later.

In a statement tabled in the Lok Sabha amid din, Mr Shinde said the station house officer (SHO) and the investigating officer (IO) have been placed under suspension, taking note of the lapses in the investigation.

"The joint CP (commissioner of police) (vigilance) has been asked to conduct an inquiry. The joint CP (vigilance) shall also inquire into the allegation that the local police paid some money to the father of the victim to hush up the case," Mr Shinde said in the statement.

The victim's parents had alleged that some police personnel had offered them Rs.2,000 and told them to keep quiet over the issue.

Mr Shinde said the two accused have been arrested in connection with the case. Both were arrested from Bihar.

Medical examination of the first accused, arrested from Muzaffarpur district of Bihar on April 19, has been conducted for DNA, he said.

The minor girl was initially admitted at the Swami Dayanand Hospital in Shahdara, east Delhi.

He said: "Some protestors were holding demonstration at the Dayanand Hospital where the minister concerned of Delhi government was visiting to enquire about the health of the child along with the local MP. A few protestors tried to break through the police cordon around the hospital in order to enter the premises."

"One ACP (assistant commissioner of police) rank officer was seen on camera slapping one of the lady protesters. The ACP has been placed under immediate suspension," he said.

The raped five-year-old child was later shifted to the All India Institute of Medical Sciences (AIIMS).

The girl was reported missing on April 15 from Gandhi Nagar. She was found on April 17 after her mother heard cries for help from a locked-up room in the building where the family lived.

Promoted
Listen to the latest songs, only on JioSaavn.com
The capital has witnessed widespread protest over the incident.