Delhi Chief Minister Arvind Kejriwal and his AAP government are banking on a plethora of populist measures, including free Wi-Fi and electricity subsidies, to retain power in elections scheduled for next month

Delhi Chief Minister Arvind Kejriwal and Union Home Minister Amit Shah clashed on social media this morning, ahead of next month's Assembly election, with Mr Kejriwal posting politely-worded jabs after the senior BJP leader criticised his AAP government's claims about free Wi-Fi services and the installation of CCTV cameras in schools to ensure safety of students.

In a tweet posted on Thursday night, the Delhi BJP quoted the Home Minister as claiming he had been unable to access the free Wi-Fi offered by the Delhi government despite searching so extensively that his phone ran out of battery.

"Sir... we have also arranged free battery-charging along with free Wi-Fi," Arvind Kejriwal tweeted, with a pointed reminder that the Home Minister needn't pay for the electricity because his government had also offered Delhi citizens free power up to 200 units.

The two also sparred over the installation of 1.2 lakh CCTV cameras in 1,041 government-run schools - a key promise in the last election - with Delhi BJP again quoting Mr Shah as saying the AAP was "fooling the public" by installing only a few cameras. 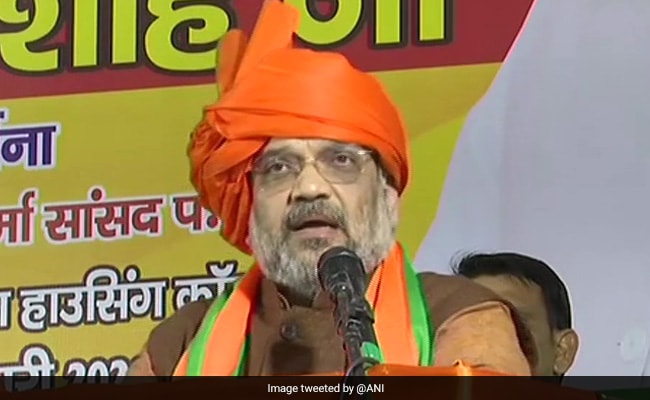 Mr Kejriwal hit back by thanking Mr Shah and the BJP for noticing "some" CCTV cameras.

"I'm glad you saw 'some' CCTV cameras. A few days ago you said 'don't install a single camera'. Now let us show you the schools too?" the Chief Minister hit back, adding, "I am happy that the people of Delhi have changed the politics... so the BJP has to ask for votes on CCTV and schools".

The two high-profile politicians were the focus of campaigning on Thursday, after they addressed rallies in the same neighbourhood on the same day. In southwest Delhi's Matiala, the day began with a roadshow by Mr Kejriwal and ended with a public meet by Mr Shah.

Delhi Assembly elections are scheduled for February 8, with Arvind Kejriwal and the AAP (Aam Aadmi Party) seeking a second consecutive term. The AAP claimed a record majority in 2015 polls, winning 67 of the 70 seats, and is targeting a clean sweep this time.

Earlier this week the Chief Minister announced a "10-point guarantee card" that promised free power, 24-hour drinking water on tap and a world-class education to every child.

In contradictory positions, the BJP has both criticised and sought to top Mr Kejriwal's "guarantees", with Delhi East Lok Sabha MP Gautam Gambhir claiming freebies could lead to people taking them for granted and Delhi BJP chief Manoj Tiwari - with whom Mr Kejriwal sparred earlier this week - claiming his party would offer "five times more" if it came to power.