Rajnath Singh arrived the INS Hansa base in Goa by a special flight in the afternoon and around 2.40 pm, he reached the GMCH, where Shripad Naik is undergoing treatment. 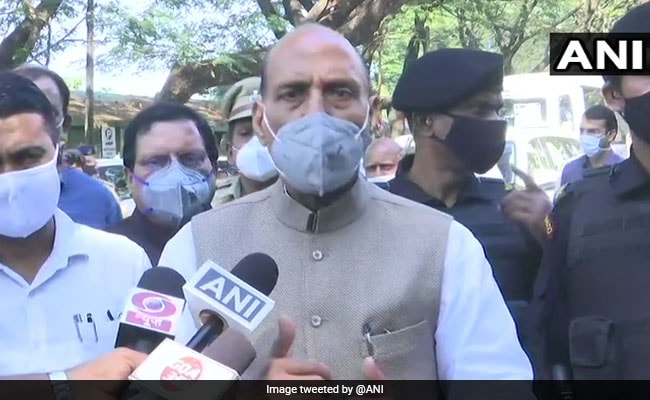 Defence Minister Rajnath Singh on Tuesday visited Union minister Shripad Naik, who is admitted in the Goa Medical College and Hospital near Panaji after he met with an accident in neighbouring Karnataka.

Mr Singh arrived the INS Hansa base in Goa by a special flight in the afternoon and around 2.40 pm, he reached the GMCH, where Mr Naik is undergoing treatment.

Mr Naik (68), the Union Minister of State for Defence and AYUSH, underwent surgeries at the government-run hospital during the night, a senior official from the hospital said in the morning.

His health condition is stable, the official said.

Mr Naik received injuries, while his wife Vijaya and an aide died on Monday when their car met with the accident near Ankola in Uttar Kannada district, while he was returning to home state Goa from Dharmasthala in neighbouring Karnataka.

"A team of doctors led by Dean of GMCH Dr Shivanand Bandekar is treating him. We are giving him the best medical care, the chief minister said.

Health Minister Vishwajit Rane had said another medical team was on a standby to ensure best treatment for Mr Naik.