Describing the conversation as "warm", Rajnath Singh said it was agreed upon to continue with the "useful dialogue" and strengthen the India-US partnership further. 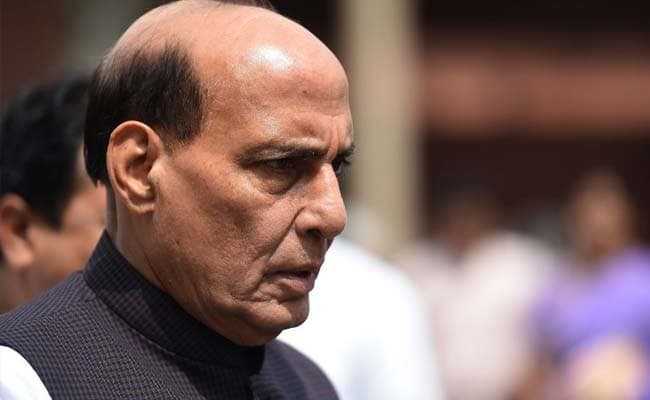 The developments in Afghanistan, ways to combat terrorism and issues pertaining to bilateral defence cooperation figured prominently during a telephonic conversation between Defence Minister Rajnath Singh and his American counterpart Lloyd J Austin on Monday.

The conversation came ahead of Prime Minister Narendra Modi's visit to the US this week to attend an in-person summit of Quad leaders in Washington and address the United Nations General Assembly (UNGA) in New York.

The defence ministry said Mr Singh and Austin exchanged views about combatting terrorism in the region and appreciated the mutual cooperation in the recent evacuation operations in Afghanistan.

"Both sides appreciated the mutual cooperation in the recent evacuation operations in Afghanistan and agreed to remain in regular contact in view of the evolving situation," it said about the conversation initiated by Austin.

Describing the talks as "warm", Mr Singh said both sides agreed to continue with the "useful dialogue" and strengthening the India-US partnership further.

"We agreed to continue the useful dialogue & look forward to strengthening the partnership further," he said.

India and the US are in touch with each other on the Afghan crisis after the Taliban's takeover of Kabul on August 15.

"US Secretary of Defence Lloyd Austin made a telephone call to Defence Minister Rajnath Singh today evening. Both the leaders discussed bilateral and regional matters, including developments in Afghanistan. They discussed defence cooperation and looked forward to working closely," the defence ministry said in a statement.

In reflection of India's views on the Afghan crisis, PM Modi on Friday said the global community should decide "collectively" and "thoughtfully" on according recognition to the new set-up in Afghanistan in view of questions over its acceptability as the change of power was not "inclusive".

The Prime Minister also warned that continuing instability and fundamentalism in Afghanistan will embolden terrorist and extremist ideologies all over the world.

He made the remarks during a virtual address at a meeting on Afghanistan of the heads of state of the Shanghai Cooperation Organisation (SCO) and the Collective Security Treaty Organisation.

At the Quad summit on September 24, US President Joe Biden, PM Modi, Australian Prime Minister Scott Morrison and Japanese Prime Minister Yoshihide Suga are expected to deliberate on the situation in Afghanistan, besides other issues.

In March, Biden hosted the first-ever summit of the Quad leaders in a virtual format that vowed to strive for an Indo-Pacific region that is free, open, inclusive, anchored by democratic values and unconstrained by coercion, sending an apparent message to China.

US Secretary of State Antony Blinken paid a two-day visit to India in July. Before that, Austin had paid a three-day visit to New Delhi in March.