Rajnath Singh was seen witnessing the "para dropping and other military exercises" at Stakna forward post in photos shared by his office.

India-China standoff: Rajnath Singh is in Ladakh and Jammu and Kashmir for two days.

India-China talks should resolve the border dispute, Defence Minister Rajnath Singh said this afternoon as he interacted with the troops in Ladakh, adding the extent of the success, however, "cannot be guaranteed". The Defence Minister landed in Ladakh this morning, over a month after the June 15 clash with China in which 20 soldiers were killed in the line of duty.

"Whatever talks have happened so far, the matter should get resolved... but to what extent it would be resolved, I cannot guarantee. However, I want to assure you that not an inch of our land can be taken by any power in the world," Rajnath Singh told the troops as he visited the Lukung post near Pangong Lake.

The Lukung post is in the northwestern side of lake, 43 km by road from the Finger 4 area, where the troops of India and China are in the process of disengagement. Lukung is a combined post, where the Indian Army and the Indo-Tibetan Border Police are stationed.

The Defence Minister is on a two-day visit to Ladakh and Jammu and Kashmir. In visuals, Chief of Defence Staff General Bipin Rawat and Army chief General MM Naravane were seen accompanying him.

"India is the only country in the world that has given a message of peace to the world. We have never attacked a nation and have never staked claim to any country's land. India believes in the message - 'Vasudhaiva Kutumbakam' (world is one family)," the Defence Minister said today during his address. 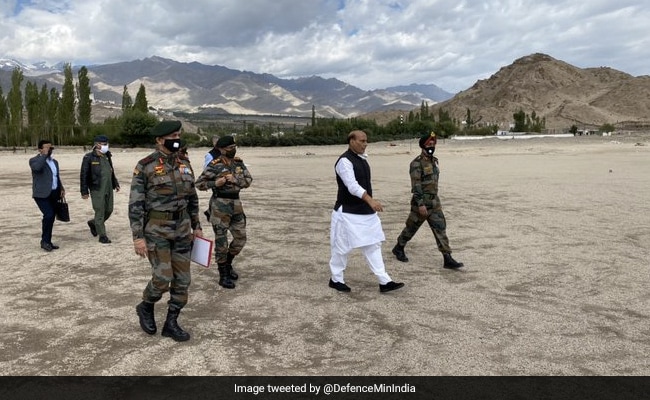 "We do not want unrest, we want peace. It has not been our nature to hurt any country's pride. If any attempt is made to hurt India's pride, it won't be tolerated... we will give a befitting reply," Mr Singh said.

"We are proud of our army. I feel proud as I stand among our jawans. Our jawans have laid their lives for the country. All 130 crore Indians are saddened by the loss," he added.

A few pictures tweeted by Rajanth Singh's office this morning showed him witnessing the "para dropping and other military exercises" at Stakna forward post. "Witnessed the Fire and Fury of the Indian Army during the Para Dropping and other military demonstrations at Stakna near Leh today.
Also, I got the opportunity to interact with them. I am proud of these brave and courageous soldiers (sic)," Mr Singh later wrote in a tweet.

Witnessed the Fire and Fury of the Indian Army during the Para Dropping and other military demonstrations at Stakna near Leh today.

Also, I got the opportunity to interact with them. I am proud of these brave and courageous soldiers. pic.twitter.com/WYJzx6z6Sh

RM with the troops who participated in the para dropping and other military exercise at Stakna. pic.twitter.com/mN67nsGiAh

After reviewing operational preparedness on the Line of Actual Control -- the de facto border between India and China -- Mr Singh flew to Srinagar to review situation on Line of Control. Mr Singh was earlier scheduled to visit Ladakh on July 3 but his visit was postponed.

On Thursday, the Army said that India and China are making progress on ending the months-long military face-off but it is a complicated process and needs verification on the ground. In visuals, Rajnath Singh was seen offering sweets to troops in Ladakh.

"The Senior Commanders reviewed the progress on implementation of the first phase of disengagement and discussed further steps to ensure complete disengagement," said army spokesman Colonel Aman Anand. "The two sides remain committed to the objective of complete disengagement. This process is intricate and requires constant verification," he said.

Last month, a clash erupted in the high-altitude Galwan Valley in the Ladakh region in which 20 Indian soldiers were killed and China took an unspecified number of casualties, prompting top level diplomatic and military talks.

China on Wednesday asserted that there had been progress in defusing the border crisis, news agency Reuters reported.

On July 3, Prime Minister Narendra Modi had made a surprise visit to a forward post in Nimu, Ladakh, and interacted with the troops at a height of 11,000 feet. In photos, PM Modi sat in a camouflage tent as he spoke to hundreds of soldiers seated at a distance from each other.

"The age of expansionism is over, this is the age of development. History knows that expansionist forces have either lost or were forced to turn back," he said, addressing soldiers during the visit that served as a morale booster for the forces and a powerful message to China.

"The weak can never accomplish peace, the brave do," the Prime Minister had said.