Defence Minister Rajnath Singh on a three-day visit to attend a crucial meeting of the Shanghai Cooperation Organisation (SCO), pressed for expediting supply of a number of weapons systems, ammunition and spares to India by Russia under contracts which were concluded earlier. 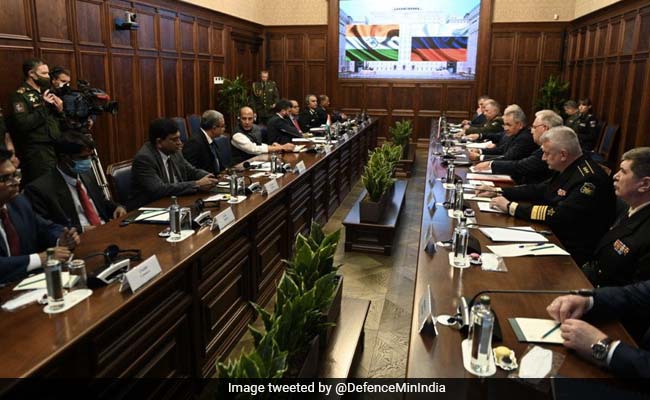 Rajnath Singh termed meeting with Sergey Shoigu at the Russian Ministry of Defence as "excellent".

Defence Minister Rajnath Singh on Thursday said he had an "excellent meeting" with his Russian counterpart Gen. Sergey Shoigu during which he appreciated the "steadfast support" provided by Russia in response to the country's defence and security needs.

Mr Singh, who arrived here on Wednesday on a three-day visit to attend a crucial meeting of the Shanghai Cooperation Organisation (SCO), pressed for expediting supply of a number of weapons systems, ammunition and spares to India by Russia under contracts which were concluded earlier.

Taking to Twitter, Mr Singh termed his one-hour meeting with Mr Shoigu at the Russian Ministry of Defence as "excellent".

"Excellent meeting with the Russian Defence Minister General Sergey Shoigu in Moscow today. We talked about a wide range of issues, particularly how to deepen defence and strategic cooperation between both the countries," he said in a tweet.

The meeting was marked by the traditional warmth and friendship, characteristic of the special and privileged partnership between India and Russia in which military technical cooperation and military-to-military cooperation constitute an important pillar, according to a statement by the defence ministry.

Mr Shoigu conveyed his warm appreciation to Mr Singh for his participation in the 75th anniversary of Victory Day Parade at Red Square on June 24 and his participation in the joint meeting of the SCO, Commonwealth of Independent States (CIS) and Collective Security Treaty Organization (CSTO) countries. His meeting with Mr Singh was the first meeting he was having with visiting Defence Ministers.

In a series of tweets, the Defence Ministry Spokesperson said the meeting covered a broad range of areas of cooperation between the two countries.

It was noted that Thrusday's meeting coincides with the Indra Naval Exercises to be conducted by the Indian and Russia navies off the Straits of Malacca over the next two days.

Mr Singh noted that these exercises demonstrated the common interests of both the countries in maritime security in the Indian Ocean Region.

There was substantial commonality in positions with respect to challenges at the regional and international levels in the areas of peace and security.

The minister "conveyed appreciation for the steadfast support provided by Russia consistent with the defence and security needs of India, and in this context, particularly noted the timely manner in which the Russian had responded to requests for procurement of particular weapon systems," it said, adding that both sides would continue to maintain contacts to ensure the timely delivery.

"Both sides welcomed the advance stage of discussions for the establishment in India of an India-Russian Joint Venture for the production of AK203 assault rifles which are considered one of the most modern weapons available for infantry forces.

"General Shoigu reiterated commitment of the Russian side to engage actively with our MOD (Ministry of Defence) to ensure the success of ''Make-in-India'' programme including substantial participation in the forthcoming Aero India Exhibition to be held in February next year," the ministry said in separate tweets.

Mr Singh also extended an invitation for Mr Shoigu to visit India for the next meeting of the Inter-Governmental Commission for Technical and Military Cooperation which is expected to be held towards the end of this year, it said.

It is Mr Singh's second visit to Moscow since June. He had represented India at the Victory Day Parade in Moscow on June 24 that commemorated the 75th anniversary of the Soviet victory over Nazi Germany in the Second World War.

Mr Singh will also attend a meeting of the Shanghai Cooperation Organisation here on Friday which will be attended by the defence ministers of the eight member nations.

They are expected to deliberate on regional security challenges like terrorism and extremism and ways to deal with them collectively.
The meeting is taking place under the shadow of a fierce border row between India and China, both members of the influential bloc.

The SCO, seen as a counterweight to NATO, has emerged as one of the largest transregional international organisations which accounts for almost 44 per cent of the world population stretching from the Arctic Ocean to the Indian Ocean and from the Pacific Ocean to the Baltic Sea.

The aim of the SCO is to maintain peace, stability and security of the region. India became a member of the SCO in 2017.