Defence Minister Raises Corridor Through PoK In Meeting With China 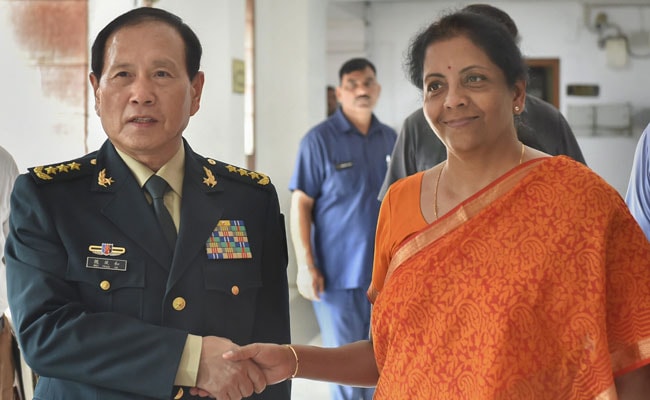 India and China on Thursday decided to work towards firming up a new bilateral pact on defence cooperation and agreed to increase interactions between their militaries at multiple levels to avoid Doklam-like standoffs.

The decisions were taken at a two-hour meeting between Defence Minister Nirmala Sitharaman and her Chinese counterpart Wei Fenghe, officials said, adding the focus was to build mutual trust between the two armies guarding the 3,500-km border.

The two sides also decided on early operationalisation of the proposed hotline between the two armies as part of confidence-building measures, the defence ministry said.

Sources said Ms Sitharaman talked about security challenges India has been facing because of cross-border terrorism, its views on bringing peace and stability in Afghanistan and the need for ensuring freedom of navigation and overflight in South China Sea.

The sources said she also raised the issue of the $46 billion China-Pakistan Economic Corridor which is passing through Pakistan-occupied Kashmir, as she noted that it violates India's sovereignty.

They said the two sides primarily focused on implementing decisions taken at the Wuhan summit in April by Prime Minister Narendra Modi and Chinese President Xi Jinping, which included enhancing strategic communication between the two armies.

Wei arrived in New Delhi on Tuesday on a four-day visit with an aim to explore measures to build trust between the armies of the two countries,

Doklam, in the Sikkim sector, is a strategically important area which is claimed by Bhutan. India has been acting as a security guarantor to the Himalayan kingdom in the sensitive region.

In the meeting, both sides agreed that the proposed hotline between the armies of the two countries should be operationalised soon. It was, however, not immediately known whether the two sides could resolve the issues, delaying its operationalisation.

The Indian Army has been maintaining that the hotline should be between its Director General of Military Operations (DGMOs) and his equivalent official in People's Liberation Army (PLA). However, Beijing proposed that the deputy commander of its Chengdu-based Western Theatre Command would engage with the Indian DGMO.