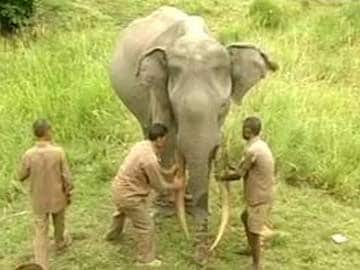 Guwahati: A giant 73-year-old elephant died on Wednesday at a famed wildlife sanctuary in northeast India, bringing tears to the eyes of his keepers - and fellow pachyderms.

Kaziranga is a world-famous rhino sanctuary with around a dozen elephants that take tourists inside the park, with guards also using the creatures for patrols.

"He was the darling of Kaziranga for decades and I could not stop crying when he breathed his last this morning," Mohan Karmakar, Joyraj's "mahout", or keeper, said by telephone on Wednesday.

"A number of other elephants nearby were trumpeting loudly and had tears rolling down their faces - a sight best seen than told," Karmakar said.

Joyraj had served the park for 65 years until he retired in 2008.

"Joyraj was an extraordinary animal. He carried countless tourists on elephant safaris inside the park to let them glimpse the rhinos and other animals," Karmakar said.

"He also helped us break up fights between wild tuskers inside the park and engaged in several of the anti-poaching operations."

Park rangers and forest guards stood beside the giant carcass offering floral wreaths as a mark of respect.

"His height and mature handling of difficult situations are things nobody in the park will ever forget," said N.B. Das, a forest keeper.

According to latest figures, some 2,500 of the world's estimated 3,300 one-horned rhinos lumber around the wilds of Assam.

Kaziranga alone is home to 2,290 rhinos according to a 2012 census.
Comments
AssamGuwahatiJoyrajMohan KarmakarKaziranga National Parkelephant